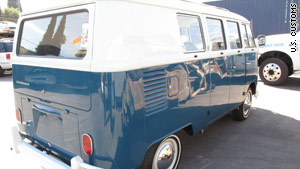 The 1965 Volkswagen van is in pristine condition, officials say.

The Arizona company that was shipping the van had no idea the vehicle was stolen from a Spokane auto shop in 1974, Hoffman said.

Customs and Border Protection agents routinely run vehicle identification numbers through the National Insurance Crime Bureau database for all vehicles being loaded on ships for export, he said. They recover stolen vehicles about once a week, but they usually are high-end late-model luxury cars, he said.

While it was likely worth just a few hundred dollars when it was stolen, the VW is now valued at about $27,000, he said.

Allstate Insurance Company, which paid the original owner for the loss decades ago, now owns the van, according to Allstate spokeswoman Megan Brunet.

The insurance company has not decided if it will sell the van at auction -- which is the routine -- or put it to other use because of it's history, she said.