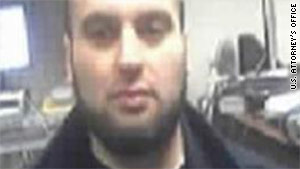 Mohammad Alsahi, aka Mohammad Philistine, is at large, authorities say.

Detroit, Michigan (CNN) -- Six men appeared in federal court Thursday, a day after they were arrested in raids targeting an African-American Muslim group that the FBI said sought to establish an Islamic state in the United States.

Luqman Ameen Abdullah, the alleged leader of the African-American Muslim converts, was fatally shot during one of Wednesday's raids in the Detroit area after he fired at law enforcement agents who were trying to arrest him and four other suspects. An FBI dog was also killed.

Authorities say Abdullah was the imam at a Detroit mosque where he preached offensive jihad, including violence against the U.S. government and law enforcement. A criminal complaint states that he repeatedly told three confidential informants he would never be taken alive, saying "If they're coming to get me, I'll just strap a bomb on and blow up everybody."

Abdullah was one of 11 men charged Tuesday with conspiracy to commit federal crimes, including theft from interstate shipments, mail fraud to obtain the proceeds of arson, illegal possession and sale of firearms, and tampering with motor vehicle identification numbers, the FBI said in a news release.

Eight suspects were in custody, including one man already in prison on an unrelated charge and another man who was arrested on Wednesday and added to the charging sheet, U.S. Attorney spokeswoman Susan Plochinski said Thursday. An additional suspect was taken into custody in Canada on Thursday, an FBI statement said. Two men remain at large.

Mujahid Carswell, aka Mujahid Abdullah, was taken into custody in Windsor, Ontario, Canada, by Canadian authorities Thursday afternoon, the FBI said. According to the federal criminal complaint, Carswell, 30, is the eldest son of Abdullah, who was killed in the raid Wednesday. Canadian Border Patrol is holding him on immigration violations, the FBI said.

Of the six suspects who appeared Thursday afternoon in court, Abdullah Beard was ordered held without bail; and Muhammad Abdul Salaam's bail decision was delayed, as was that for Gary Laverne Porter, a 38-year teacher who was arrested at an area school.

Ali Abdul Raqib was given a $10,000 unsecured bond; Abdul Saboor was given a $100,000 bond, despite a prosecution request that he be held without bond.

Another man, Acie Pusha, who was arrested Wednesday, was described by the prosecutor as "minimally involved" and given a $10,000 bond.

The FBI criminal complaint says the group held target practice in a mosque basement, blowing holes in concrete walls. It includes references to possible attacks on the government, including Detroit's federal building and the FBI. There is also discussion about causing trouble at the 2006 Super Bowl in Detroit.

But the men were not arrested for any of that. Two law enforcement sources said the information about possible attacks was included in the charging document to add "context for the crimes they're charged with, the purpose of the group."

"They had to earn money for their mosque and the Ummah," one of the sources said. "And the purpose of Ummah was to set up a separatist state."

Ummah refers to the nationwide group to which the suspects belonged, according to the complaint. It's a group made up of mostly African-American members, including some who converted to Islam while in prison.

Ummah is led by Jamil Abdullah al-Amin -- formerly known as H. Rap Brown -- a 1960s radical and former member of the Black Panthers who once said "violence was as American as cherry pie." He is serving a life sentence in Colorado's Supermax prison for killing two Georgia police officers.

Andrew Arena, the FBI special agent in charge of the investigation, contacted local imams and civil rights leaders in Detroit during Wednesday's operation "to bridge any gaps that could possible come over this," FBI spokeswoman Sandra Berchtold said.

"He'd rather they hear it from him," she added. "We have a good relationship with the community and we want to keep it that way."

In the 43-page criminal complaint filed Tuesday in U.S. District Court in the Eastern District of Michigan and unsealed Wednesday, authorities said the arrests were made based on information gleaned from confidential sources identified only as S-1, S-2 and S-3.

"S-1 heard Abdullah encourage his followers to 'pick up guns and do something' rather than try to achieve their goals through peaceful means," the complaint said.

S-2 recorded a conversation on December 12, 2007, in which Abdullah said, "I got some soldiers with me, so it's not like I, I don't have, you know, nothing. Brothers that I know would, you know, if I say 'Let's go, we going to go and do something,' they would do it," the complaint said.

The other men charged were identified as:

Acie Pusha was arrested on Wednesday and added to the charging sheet, Plochinski said Thursday. She would not provide details about the charges against Pusha.

All of the defendants "are members of a group that is alleged to have engaged in violent activity over a period of many years, and known to be armed," the FBI said.

The complaint was filed by the FBI's counter-terrorism squad in the Eastern District of Michigan.