They make their mark in mug shot history 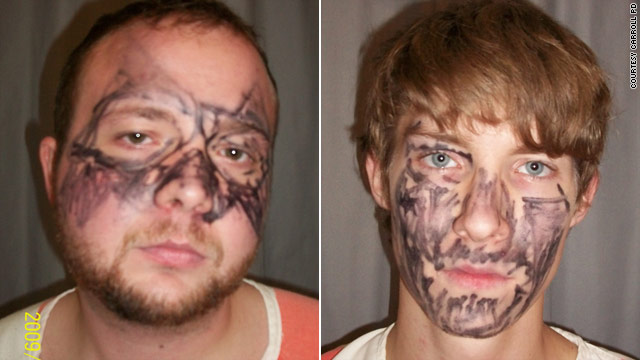 Matthew Allan McNelly, left, and Joey Lee Miller, 20, still had the permanent marker on their faces when they were booked.
STORY HIGHLIGHTS
RELATED TOPICS

(CNN) -- Police say guilt was written all over their faces.

Police received a call Friday night that two men with hooded sweatshirts and painted faces had tried to break into a man's home in Carroll, Iowa.

When police stopped a vehicle matching the caller's description blocks away, they were stunned by the men's disguises.

There were no ski masks or stockings pulled over their heads; instead, Matthew Allan McNelly, 23, and Joey Lee Miller, 20, streaked their faces with permanent black marker.

Carroll Police Chief Cayler told CNN the strange disguises made it easier for his officers.

"We're very skilled investigators and the black faces gave them right away," Cayler said jokingly. "I have to assume the officers were kind of laughing at the time. I've never heard of coloring your face with a permanent marker."

Cayler said police believe one of the alleged burglars targeted the home because he suspected his girlfriend had a relationship with the man who lived there.

I've seen a lot of things that make me laugh and weird things but this was probably the best combination of the two.
--Carroll Police Chief Cayler

"They probably were just not thinking straight and figured we'll go out and scare the guy or whatever," Cayler said. "[They were] being dumb and combine that with alcohol and it was the perfect storm."

Both men were charged with attempted burglary, and McNelly was charged additionally with operating a vehicle while intoxicated. Lawyers for the two men could not be reached for comment.

Cayler said he's been fielding calls about the case from news media outlets from all over the country -- mostly because of their funny-looking mug shots.

"I've been chief here almost 25 years, been with the department 28½ years and I've seen a lot of things that make me laugh and weird things but this was probably the best combination of the two -- strangely weird and hilariously funny all at the same time."