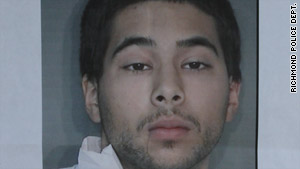 Nineteen-year-old Manuel Ortega did not enter a plea when he was arraigned Wednesday.

Richmond, California (CNN) -- Four teenagers were arraigned Thursday on charges connected to the alleged gang rape of a 15-year-old girl on a high school campus after a homecoming dance.

Cody Ray Smith, described by the court as over 14 years old, pleaded not guilty to charges of rape with a foreign object and rape by force.

Two other juveniles, Ari Abdallah Morales and Marcelles James Peter, appeared with Smith at the Contra Costa County Superior Court, but did not enter a plea. The court described Morales as under 16, and did not give an age for Peter.

All three juveniles, who wore bulletproof vests at the hearing, were charged as adults.

A fourth individual, Manuel Ortega, 19, appeared separately without an attorney and did not enter a plea. He did not wear a protective vest.

The four are accused of taking part in what police said was a 2½-hour assault on the Richmond High School campus, in the Richmond community north of Oakland on San Francisco Bay.

All of those arraigned are due back in court on November 5. Another adult was arrested in connection with the October 24 attack, but has a different court date than the others.

Police said as many as 10 people were involved in the assault in a dimly lit back alley at the school, while another 10 people watched without calling 911.

The victim was taken to the hospital in critical condition but was released Wednesday.