NEW YORK (CNN) -- A new lawsuit alleges that convicted swindler Bernie Madoff financed a cocaine-fueled work environment and a "culture of sexual deviance," and he diverted money to his London, England, office when he believed federal authorities were closing in at home. 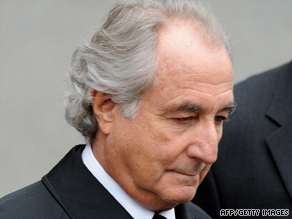 Beyond that, it offers a look at what the plaintiffs' attorneys say was once Madoff's multimillion-dollar empire and what is now his world in a federal prison in North Carolina.

Among the allegations in the 264-page lawsuit are that during the mid-1970s, Madoff began sending employees to buy drugs for company use.

The complaint alleges that some employees and investors were aware of the drug purchases, and that BMIS [Bernard Madoff Investment Services] was known by insiders as the "North Pole" in reference to the excessive amount of cocaine use in the work place.

Attorneys Joseph Cochett and Nancy Fineman filed the complaint based on an investigation, including a four-hour interview with Madoff in prison in July, that they conducted for former investors. They also allege that major financial institutions, including KPMG, the Bank of New York and JP Morgan Chase, were aware that Madoff was transferring stolen funds to his London office for personal purchases.

According to the complaint, Madoff transferred funds to London to buy extravagant personal items.

"In 2006 Madoff thought the end was near because the [U.S. Securities and Exchange Commission] investigated. He realized he had to change things up so his focus shifted to London," Fineman said. "We know that KPMG were the auditors for the London branch and that money was used to buy yachts and Bentleys, they are supposed to look at related-party transactions. KPMG should have noticed these as a red flag."

Officials of KPMG and the Bank of New York did not immediately respond to calls from CNN Wednesday evening for comment on the lawsuit.

The alleged illicit behavior outlined in the complaint did not stop at drug use and extravagant spending. Company parties consisted of topless entertainers, and some employees had affairs in places such as Madoff's own office, the lawsuit says.

Madoff was fond of escorts and masseuses, and used money stolen from investors to pay them, according to the complaint.

Madoff was convicted of operating a Ponzi scheme and defrauding thousands of investors. He pleaded guilty in March to 11 counts, including fraud, money laundering and perjury, and was sentenced to 150 years in prison. Prosecutors have said it was the largest investor fraud ever committed by a single person, totaling billions in losses to investors.

Before Madoff, 71, was transferred to Federal Butner Correctional Complex outside of Raleigh, North Carolina, he lived a life of luxury. The lawsuit states that he had multimillion dollar residences in Manhattan, Montauk on New York's Long Island; Palm Beach, Florida; and Cap d'Antibe, France.

The complaint includes details of Madoff's drastically different life now in prison. He lives in a cell where he sleeps on the bottom bunk while up top sleeps his 21-year-old cellmate, who is serving time for drug crimes, according to the lawsuit. Madoff's recreational activities consist of walking around the prison track at night, and eating pizza cooked by a convicted child molester, the lawsuit says.

Madoff now spends his time with infamous inmates, the lawsuit says, including Carmine Persico, a former organized-crime former boss, and Jonathan Pollard, a convicted spy for Israel. Many of his fellow inmates are in prison for drug and sex crimes, according to the lawsuit.

Going after large financial institutions that allegedly allowed Madoff's scheme to flourish is the goal of Fineman and her associates.

"Our goal of meeting with Madoff during the investigation is to get as much money back from responsible parties and that's why lawsuits are filed and why lawyers do what they do," Fineman said. "Even now, 10 months later, the pain in the victims' voices is still evident. I still hear it when I talk to people who were being defrauded for so long."

According to the complaint, Fineman and Cochett are seeking punitive and compensatory damages for their clients with "an amount to be determined at trial, including interest thereon."

Fineman said that during the prison interview with Madoff, "He said he was apologetic, but he didn't seem apologetic."

"I forgot I was in prison, he was talking to us as if we were in a restaurant -- he has quite an ego, you could see why people would be drawn to him," Fineman said.

"He told us things that were self-serving to him," she said. "But he told me he knew he would die in prison."

All About Bernie Madoff • KPMG LLC