(CNN) -- A Mississippi schoolteacher was sentenced to life without parole Wednesday for shooting and stabbing to death her lover's pregnant fiancee in 2006. 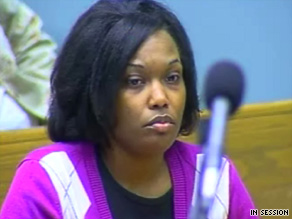 Carla Hughes met the victim's fiance at the middle school where she was a teacher.

The same jury that convicted Carla Hughes of two counts of murder Tuesday for the death of Avis Banks spared her life, declining to impose the death penalty.

Mississippi is among the states that consider murdering a pregnant woman to be taking two lives.

Madison County District Attorney Michael Guest asked the panel of nine women and three men to sentence Hughes to death based on the gruesome nature of Banks' murder.

Banks, 27, was found lying in a pool of blood on November 29, 2006, in the garage of the Ridgeland home she shared with Keyon Pittman, the father of her unborn child. She was five months pregnant.

She had been shot four times in the leg, chest and head, and then stabbed multiple times in the face and neck as she lay dying, according to medical testimony.

Prosecutors alleged that Hughes killed Banks so she could have Pittman, a colleague at Chastain Middle School in Jackson, to herself.

"She took Avis Banks' life and the life of her unborn child because she wanted that life," the prosecutor said.

The jury deliberated Wednesday for about an hour to decide on the sentence after hearing emotional testimony from seven defense witnesses, including her parents.

"Carla has been a kind, loving person all her life," said Carl Hughes, who adopted his daughter when she was 6 weeks old.

"I'm not asking you, I'm pleading with you, to spare my daughter's life," said Hughes, who is also a teacher.

He said that the person portrayed by prosecutors as a cold-blooded killer was completely different from the accomplished honors student, equestrian and beauty pageant contestant that he knew and loved.

Hughes' pastor and friends also took the stand to describe her work mentoring youths, volunteering at church and at the school where she met the victim's husband.

Suspicion initially fell on Pittman, who admitted to having an affair with Hughes, a language arts teacher. A key prosecution witness, Pittman told the jury he began seeing Hughes one month after finding out his girlfriend was pregnant. He testified that the two met frequently in Hughes' home and even went out of town together, but he insisted the relationship was based solely on sex.

Throughout the trial, defense lawyers maintained her innocence and attempted to cast blame on Pittman, portraying him as a womanizer seeking to avoid the burden of fatherhood.

Prosecutors alleged the murder weapons connected Hughes to the crime. The defendant's cousin testified that he lent her a knife and a loaded .38 caliber revolver the weekend before Banks' death. Ballistics tests matched the bullets from Banks' body to the gun, which Hughes returned unloaded to her cousin after her first interview with police.

None of Banks' relatives testified at the sentencing. Instead, the jury heard from a forensic pathologist, who described the nature of Banks' injuries.

Madison County Deputy District Attorney John Emfinger urged the jury to look past Hughes' prior achievements and focus on the crime in rendering its sentence.

"In my mind, this overshadows everything else she's done in life. She took the lives of two people in that garage," he said in his closing argument Wednesday.

All About Murder and Homicide • Mississippi