(CNN) -- The first images are emerging of an adult Jaycee Dugard, the woman who was kidnapped when she was 11 and allegedly held captive for 18 years by a couple in an elaborate compound hidden in the backyard. 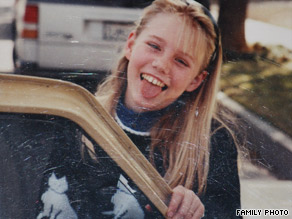 Jaycee Dugard, shown here in 1991, breaks her silence in the new issue of People magazine.

Dugard is featured on the cover of the new issue of People magazine, smiling brightly in the photo, her face framed by long brown hair.

"I'm so happy to be back with my family," Dugard told the magazine.

She lives in seclusion with her mother Terry Probyn and her two daughters, who police say were fathered by her captor Phillip Garrido.

"They live a surprisingly normal life, considering the circumstances," said Terry Probyn's stepmother, Joan Curry, according to the magazine. Read the story on People.com

Dugard spends her time riding horses and cooking and is considering collaborating on a book, People reported.

Garrido and his wife are accused of abducting Dugard in 1991 from a bus stop near her home in South Lake Tahoe, California, and keeping her in the compound behind their home in Antioch, California.

They were arrested in August and have been charged with a combined 29 felony counts in connection with the kidnapping and rape of Dugard. Both Garridos pleaded not guilty to the charges.

Last month, an attorney for Dugard's family said it has been a difficult transition for her and her two daughters, who are now 11 and 15, given her captivity spanned more than half her life and was the only world she knew for so long.

Dugard will testify against the Garridos, he said. Scott acknowledged Dugard would have to relive the "trauma" in court by sharing the "very, very sordid tale."

All About Jaycee Dugard