With arrest, memories of hijacking ordeal flood back

From Mary Snow
CNN's "The Situation Room with Wolf Blitzer"

(CNN) -- One phone call brought the 41-year-old memory back to George Hopkins instantly, flooding him with the terror of having a .38-caliber pistol jabbed into his face. 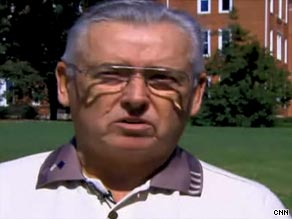 "Hey, they got the guy that hijacked us," said the voice on the phone.

Hopkins, a former flight engineer, got the call Monday from a friend and former Pan Am pilot, a day after the surrender of Luis Armando Pena Soltren.

Pena Soltren is one of the men accused of hijacking Pan Am Flight 281 on November 24, 1968, and taking it to Cuba.

The suspect had remained hidden in Cuba for decades, and Hopkins' memories of the ordeal had receded. But it's all coming back now.

"I can still remember very vividly," said Hopkins, 71. "The guy comes to the cockpit and he's got a knife. And he sticks a .38 right in my nose, right between my eyes, and I could tell it was loaded because I see the bullets around the cylinder. He has the stewardess and held her with knifepoint at the base of her skull and he said, 'Cuba, Cuba, Cuba.'"

Hopkins said he felt a burning sensation where the gun was pointed on his face.

The Situation Room with Wolf Blitzer

The Situation Room with Wolf Blitzer is the command center for breaking news, politics and extraordinary reports from around the world.
Today 4pm ET

"There was no doubt in my mind he would pull the trigger if I'd have done something very foolish," he said.

Hopkins was in the flight engineer's seat and noticed that the pilot and copilot had not seen the hijacker. He alerted them and said they needed to appease the armed man. Through the open door of the cockpit, he could see two other hijackers holding passengers at bay.

With the plane now heading to Cuba, the hijacker lowered his gun. But the armed man was extremely nervous and shaking, Hopkins said.

A second hijacker, the apparent ringleader, entered the cockpit and told the crew everything would be fine.

"He said don't worry about it, we've done this before," Hopkins said. Then the man asked whether he could bring his wife up to first class. The woman was carrying a baby, Hopkins remembers.

At one point, a fighter jet appeared in the distance and followed their plane to Cuba. The hijackers left the plane after it landed, but Cuban authorities held Hopkins and the rest of the crew on board for about six hours before they were allowed to fly back to the United States.

According to a December 1968 indictment, Soltren and three others -- Jose Rafael Rios Cruz, Miguel Castro and Alejandro Figueroa -- conspired to hijack the flight.

Cruz and Castro were sentenced in the 1970s after pleading guilty in U.S. District Court in New York. They received 15-year and 12-year sentences, respectively. Figueroa was acquitted in 1969.

Hopkins wonders now whether he would even recognize Pena Soltren.

"I never thought I'd repeat this story again," Hopkins said. "I repeated it a lot for the first several years, because it was very traumatic to us. This is the first time I've even said anything about it for five to 10 years. It's been kind of nice. Your mind is able to flush things once in awhile, until something happens and then you recall it."