(CNN) -- A suspect has been arrested in the 1990 abduction and attempted murder of an 8-year-old Texas girl, a spokeswoman for the FBI's Houston, Texas, office said. 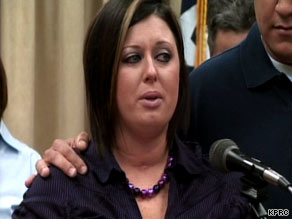 Jennifer Schuett speaks at a news conference, urging other victims of violent crime to use their voices.

The victim, Jennifer Schuett, is now 27. She recently shared her story with CNN in hopes of someday bringing her attacker to justice.

Schuett fought tears as she spoke at a news conference in Dickinson, Texas.

"This event in my life was a tragic one," she said. "But today, 19 years later, I stand here and want you all to know that I am OK. I am not a victim, but instead, victorious."

She continued, "I hope that my case will remain as a reminder to all victims of violent crime to never give up hope ... With determination and by using your voice to speak out, you are capable of anything."

Dennis Earl Bradford, a 40-year-old welder, was arrested at 6:50 a.m. Tuesday in Little Rock, Arkansas, authorities said. He was on his way to work, and his wife was in the car with him.

DNA and other forensic testing led to him, authorities said. His DNA profile was in the FBI database due to a 1996 arrest in Arkansas.

Schuett was abducted from her bedroom, raped and left for dead August 10,1990. She spoke with CNN two weeks ago.

CNN normally does not identify victims of sexual assaults. But Schuett decided to go public with her story -- and her name -- to increase the chances of finding and prosecuting her attacker.

"It's not about me anymore," she told CNN in September. "It's about all the little girls that go to sleep at night. I know there are so many girls out there who have been raped and hurt. You have to fight back."

Schuett says she was alone in her bed when a man crept in through a window. She remembers waking up in a stranger's arms as he carried her across a dark parking lot.

She said he told her he was an undercover cop and knew her family.

He drove her through the streets of Dickinson, Texas, pulling into a mechanic's shop next to her elementary school.

"Watch the moon. The moon will change colors, and that is when your mom will come to get you," she recalled him saying. "Oh, it looks like she is not coming."

Schuett said he drove her to an overgrown field next to the school and sexually assaulted her.

She passed out. When she regained consciousness, she was lying naked on top of an ant hill with her throat slashed from ear to ear, and her voice box torn.

She was found at 6 p.m. on a hot August day after lying in the field for nearly 12 hours. She was rushed to a hospital in critical condition.

"Three days after the attack, I started giving a description. The doctors told me I would never be able to talk again, but I proved them all wrong," Schuett said. She believes she got her voice back so she could tell her story.

Houston FBI Special Agent Richard Rennison is one of the lead investigators in the case, along with Dickinson police Detective Tim Cromie. Read the affidavit

Both men were discussing the case when Rennison received a memo from the FBI's Child Abduction Rapid Deployment (CARD) team seeking child abduction cases that had gone cold and could be retested for DNA evidence. Schuett's was one of the cases selected.

Rennison, who has 10 years of experience in child abduction cases, said he has never seen a case like Schuett's.

"This is the only one that I can think of that the victim has suffered some traumatic injuries and survived," he said, "The main reason the CARD team picked this case was because she was alive. In cases of child abduction, it is rare that the child is recovered alive. Frequently, you recover a body. And most times, you never find them."

The investigators found evidence collected 19 years ago, which was retested. It included the underwear and pajamas Schuett was wearing, as well as a man's underwear and T-shirt, which were found in the field where Schuett was left for dead.

The clothes were tested in 1990, but the sample wasn't large enough for conclusive results. But now, modern techniques allow DNA to be isolated from a single human cell.

They were still awaiting the results when CNN featured Schuett's story in late September.

All About Sexual Offenses • Kidnapping • Federal Bureau of Investigation