CANTON, Mississippi (In Session/CNN) -- A Mississippi middle school teacher could face the death penalty after she was found guilty Tuesday of fatally shooting and stabbing her lover's pregnant fiancee in 2006. 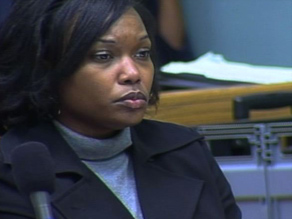 Carla Hughes, 28, sobbed loudly as a judge read the verdicts on two counts of capital murder for the deaths of Avis Banks and her unborn child. The jury also found the slayings occurred during the commission of a burglary, making Hughes eligible for the death penalty.

A jury of nine women and three men are due to return to Madison County Circuit Court Wednesday morning to decide if Hughes should be executed for killing Banks, who was five months pregnant. Their verdict must be unanimous or Hughes will receive a life sentence.

Mississippi is among the states that consider murdering a pregnant woman to be taking two lives.

Madison County district attorneys alleged Hughes killed Banks so she could be with Keyon Pittman, her lover and colleague at Chastain Middle School in Jackson, Mississippi.

Banks, 27, was found lying in a pool of blood on November 29, 2006, in the garage of the Ridgeland home she shared with Pittman, the father of her unborn child.

She had been shot four times in the leg, chest and head, and then stabbed multiple times in the face and neck as she lay dying, according to medical testimony.

Suspicion initially fell on Pittman, who admitted to having an affair with Hughes, a language arts teacher. Pittman, a key prosecution witness, told the jury he began seeing Hughes one month after finding out his girlfriend was pregnant. He testified that the two met frequently in Hughes' home and even went out of town together, but he insisted the relationship was based solely on sex.

Throughout the trial, defense lawyers maintained her innocence and attempted to cast blame on Pittman, portraying him as a womanizer seeking to avoid the burden of fatherhood.

But prosecutors said they could not link the crime to Pittman, who testified that he invoked his right against self-incrimination during a preliminary hearing when asked where he was the afternoon his fiancée was killed.

Instead, prosecutors alleged that the murder weapons connected Hughes to the crime. The defendant's cousin testified that he lent her a knife and a loaded .38 caliber revolver the weekend before Banks' death. Ballistics tests matched the bullets from Banks' body to the gun, which Hughes returned unloaded to her cousin after her first interview with police.

Madison County District Attorney Michael Guest said Banks' relatives plan to deliver victim impact statements at the sentencing. He said medical testimony will be presented to support the prosecution's claim that the murders were gruesome and heinous, and warrant the death penalty.

Hughes' lawyer, Johnnie E. Walls, Jr., a Mississippi state senator, said her relatives will testify in a bid to spare her life.

All About Murder and Homicide • Mississippi