LOS ANGELES, California (CNN) -- Investigators have found the knife believed to have been used in the stabbing of a University of California, Los Angeles student in a chemistry lab, authorities said Friday. 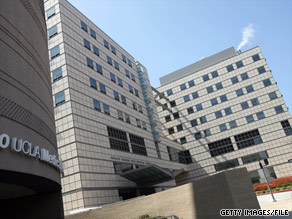 The 20-year-old, whose identity has not been released, is being treated at the UCLA hospital for multiple stab wounds, including ones to her neck, sustained in the Thursday attack.

Police have arrested Damon Thompson, a 20-year-old UCLA senior, who is accused of stabbing the woman at the lab in Young Hall. He is being held on $1 million bail.

The knife was found at the scene of the attack on Thursday, Detective Mike Pelletier told CNN, though he did not disclose details about the weapon.

A statement Friday from the victim's family said, "She is showing signs of improvement, and her surgeons expect a good result as she continues to heal."

Last month, Connecticut authorities found the body of a 24-year-old pharmacology graduate student inside a wall of a lab building at Yale University. She had been strangled.

Raymond Clark III, 24, a lab technician at Yale, is charged with murder in Annie Le's death.

CNN's Monica Trevino and Sonya Hamasaki contributed to this report.

All About Criminal Assault • University of California-Los Angeles