Cops: Husband shot soccer mom as she chatted on webcam

(CNN) -- A Pennsylvania soccer mom was chatting with a friend via webcam when she was shot to death by her husband, who then went upstairs and shot himself, police said Friday. 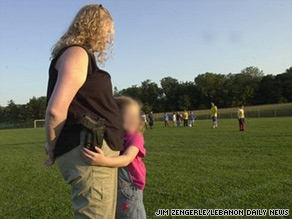 Pistol-packing soccer mom Meleanie Hain was shot dead while chatting with a friend on a webcam, police said.

Meleanie Hain, 31, made national headlines last year as the mother who carried a loaded, holstered handgun to her 5-year-old daughter's soccer game.

She was found dead in her Lebanon, Pennsylvania, home along with her husband, Scott Hain, 33, on Wednesday evening, Lebanon police said.

Hain was in her kitchen talking with a friend via webcam just before her death, police said.

The friend, who police will not name, was looking away from the computer screen when he heard a shot and a scream, police said. He turned back to the monitor, he told police, and no longer saw Meleanie Hain but instead saw Scott Hain firing several rounds from a handgun toward where his wife had been.

Police said that the woman's body had already fallen to the floor by the time the friend turned back to the screen.

Scott Hain then went upstairs to a bedroom, where he shot himself in the head with a 12-gauge shotgun, police said.

Meleanie Hain was shot several times with a 9 mm handgun, police said. Her fully loaded 9 mm handgun was found in her backpack hanging on the back of the front door.

The couple's three children were home at the time of the killings, police Capt. Daniel Wright said. They were unharmed and took refuge at a neighbor's house before police arrived, he said.

Investigators have confiscated the webcam and computer, but cannot review what the friend says he saw because the online conversation was not recorded.

The death of the couple came four months after Meleanie Hain told her attorney she was separating from her husband, her attorney, Matthew B. Weisberg, told CNN Thursday. However, police said the couple still appeared to be living together.

Meleanie Hain drew media attention on September 11, 2008, when she carried a Glock strapped to her belt to her daughter's soccer game.

Nine days later her permit to carry a gun was revoked by Lebanon County Sheriff Michael DeLeo, who claimed she showed poor judgment by wearing the weapon to a child's game. County Judge Robert Eby later reinstated the permit.

CNN's Edmund DeMarche and Susan Candiotti contributed to this story