SEATTLE, Washington (CNN) -- Who is stealing -- and crashing -- airplanes in Washington state? 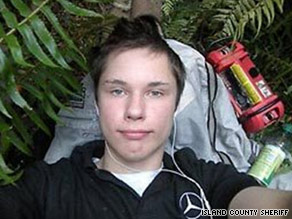 Police say they found this self-portrait of Colton Harris-Moore in the deleted file of a stolen digital camera.

The 18-year-old man police call the prime suspect does not have a pilot's license. But he does have a nickname -- "The Barefoot Burglar" -- and a Facebook fan club, which compares him to Jesse James "without the murders" and exhorts: "Fly, Colt, Fly."

Police say Colton "Colt" Harris-Moore has been linked to crimes in five counties involving planes, luxury cars and boats. He's known to alternate between squatting in vacant vacation homes, which he allegedly burglarizes, and roughing it in the woods.

Since November, police say, at least three small, private planes have been stolen and flown away. The latest to go missing crash-landed last week in a clearing in Granite Falls, Washington, after running out of fuel, police said.

The rough landing damaged the Cessna 182, which along with its instruments is worth more than $500,000. But authorities said the plane's pilot appears to have walked away unhurt.

Harris-Moore has not been charged in any of the plane thefts. But authorities are testing vomit found in the cockpit of one plane to see whether they can place the teen inside.

Harris-Moore has been on authorities' radar for years. "Colt," as he is called, was first arrested for burglary at age 12, said Detective Ed Wallace, a spokesman for the Island County Sheriff's Office. The break-in at a local school earned Colton a few weeks in a juvenile facility, Wallace said.

Local media reports tally nine arrests for Harris-Moore before the age of 15. Now police in five counties in Washington state are looking for him.

Harris-Moore dropped out of high school and, according to Wallace, police believe he spent his teens burglarizing unoccupied homes on Camano Island, a vacation community of about 15,000 people off the Washington state coast. He became known as "the Barefoot Burglar," because, investigators say, he preferred to prowl shoeless.

"He will typically break into a home or vehicle and copy down the credit card numbers," Wallace said. "He then leaves the credit cards behind so people don't realize they have been stolen."

When Harris-Moore wasn't squatting in homes, he took to the woods with survival gear to elude police. He's been known to hide in the trees. "He's almost like a feral child," Wallace said.

Harris-Moore's days of running from authorities on the 40-square-mile island appeared to end in 2007 when he was arrested and pleaded guilty to three counts of burglary. Wallace said some of the charges were dismissed as part of the guilty plea.

Less than a year later, Wallace said, Harris-Moore allegedly walked away from a juvenile halfway house.

Police on Camano Island again began receiving reports of thefts that fit Harris-Moore's profile, Wallace said. In 2008, a deputy said he spotted Harris-Moore in a stolen Mercedes-Benz, but he lost the suspect when he allegedly dove from the moving vehicle.

After the chase, police recovered a stolen digital camera from the car. Wallace said he found a deleted self-portrait of Harris-Moore, who posed in a shirt with a telltale Mercedes-Benz insignia. The shirt also belonged to the vehicle's owner.

Harris-Moore faces 10 counts in that case, as well as other thefts, Internet crimes and burglaries, Wallace said. Charges are expected soon in a dozen more cases.

Harris-Moore dropped from sight for a while when wanted posters of him went up around Camano Island. Soon, though, authorities in the San Juan Islands noticed a series of break-ins and wondered whether Harris-Moore was island-hopping.

The theft of a Cessna 182 from the San Juan Islands in November jogged Wallace's memory. He recalled what he had found on a computer he said Harris-Moore used. "He had looked at flight manuals and how to fly a plane," he said.

Another theft of a small experimental plane had been reported in September. John Zerby, undersheriff of San Juan County, said police don't think the two thefts are a coincidence. "This doesn't happen here, that's why we think they go together," he said.

Police consider Harris-Moore to be a fugitive. Even though Harris-Moore has no known flight training, Zerby said police are certain he is their mystery pilot.

Harris-Moore's mother doubts her son learned to fly on his own.

"Any time anything is stolen, they blame it on Colt," Pam Kohler told the Everett Herald newspaper. "Let's say you're the smartest person in the world. Wouldn't you need a little bit of training in flying a plane? They're not easy."

CNN attempted to contact Kohler, but her phone was disconnected. CNN also tried to reach a former attorney for Harris-Moore but the lawyer has not returned calls requesting comment.

Experts said that teaching oneself to fly is difficult but not impossible.

"It's been heard of," said flight instructor Devin Tolentino. "Let's face it, the Wright brothers were able to teach themselves. Landing would be the hardest part, but if you weren't too concerned about using the plane again, it could be done."

Meanwhile, authorities in Whatcom County are investigating whether Harris-Moore stole a boat and used it to reach Point Roberts, where burglaries at three vacation homes have recently been reported, Deputy Jeff Roberts said. Point Roberts, a small peninsula, is U.S. territory but is accessible only from the water or through Canada. From parts of Point Roberts, entering Canada is just a matter of crossing the street.

Last week, law enforcement agencies got a new lead when a private plane was stolen in Bonner's Ferry, Idaho, just across the border from Canada. Residents noticed a plane flying at an altitude of 100 feet as it left the area on Tuesday, said Detective Dave McClelland.

The plane was found Thursday, crashed and out of fuel in a patch of cleared forest in Granite Falls, Washington. On Sunday, authorities say they received a report of a burglary. "Blankets, shoes and food [were] taken instead of big-ticket items like TVs," said sheriff's spokeswoman Rebecca Hover.

A gunshot rang out as deputies searched the woods and came across some of the stolen items, Hover said. No one was injured, but the SWAT team was called in.

Police searched the area, using a helicopter with an infrared heat detection scanner and another Blackhawk helicopter provided by the Department of Homeland Security.

Low-tech police work led to Harris-Moore's arrest in 2005. Police staked out his mother's house, waiting until someone inside ordered a pizza. Police rode in the delivery car to the house and waited for Harris-Moore to come to them.