(CNN) -- Three research scientists have taken a rare public stand against animal-rights activists, describing them as terrorists for their threats and acts of violence in commentaries published in the latest issue of The Journal of Neuroscience. 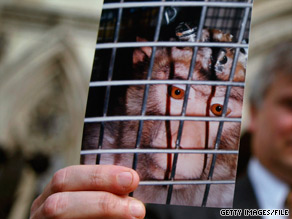 Three researchers say they are going to stand up against animal-rights activists who use extreme tactics.

Since 2003, "we have seen our cars and homes firebombed or flooded, and we have received letters packed with poisoned razors and death threats via e-mail and voice mail," wrote Dario L. Ringach, a professor of neurobiology and psychology, and J. David Jentsch, a professor of psychology. They work at the University of California, Los Angeles.

"Adding insult to injury, misguided animal-rights militants openly incite others to violence on the Internet, brag about the resulting crimes, and go as far as to call plots for our assassination 'morally justifiable,' " they wrote.

In telephone interviews with CNN, both men said they had been subject to harassment, threats and violence.

Last March, "they blew up my car while it was parked in front of my home at 4 a.m.," said Jentsch, who uses rodents and nonhuman primates in his research into how brain chemistry influences mental disorders. His 2006 Volvo was destroyed.

The Animal Liberation Brigade, which took responsibility for the attack in a Web site posting, announced "when we come back, it's not going to be the car, hint, hint," Jentsch said.

He said an FBI investigator described the incendiary device as "sophisticated."

"We have to take them on directly"

The practice long followed by many researchers of keeping quiet and hoping the activists will go away does not work, said the 37-year-old scientist. "We have to take them on directly; that's what we plan to do ... I'm not going to be afraid of these people; they're thugs."

Jentsch said the university has provided him with round-the-clock security, along with a handful of other researchers who have been threatened.

He acknowledged that having no children may make such a stand easier to take.

"People ask me all the time: 'What should people who have children do?' " he said. "My only answer is -- what a horrible position to put someone in where they have to choose between their family and their career, their desire to make the world a better place through their science."

That was the decision faced by Ringach, who previously worked with primates. Three years ago, when his 6-year-old and 2-year-old children were asleep, 30 to 40 masked activists arrived at their house and banged on the doors and windows, he said.

Ringach gave up his work with animals.

As a result of that incident, Congress passed the Animal Enterprise Terrorism Act of 2006. It's a federal law that prohibits interference with animal enterprises, including research. But it is being challenged as unconstitutional and, "so far, I'm not sure it has had an effect on their activities," Ringach said.

The activists have not limited their attacks to primate researchers. Last year, at the University of California at Santa Cruz, a researcher who works with mice was awakened at dawn with his wife and their two children when their house was firebombed. They escaped.

That day, another researcher at the same school -- who works with flies and has not been identified publicly -- had his car set afire, said Ringach.

"They're really against all types of research," Ringach said.

The Foundation for Biomedical Research said it was aware of 317 incidents of extremist activity by animal rights activists from 1997 to 2008, including firebombings of researchers' homes and cars, breaking and entering, vandalism, stealing property and acts of intimidation.

Scientists bear part of the responsibility for not having explained to the public why their work is important, Ringach said.

"I would really like to have an honest and civil debate about animal research," he said. "The problem is it's very difficult to do when every day I have to look under my car and see if something is there."

Laura Eimiller, an FBI spokeswoman, noted that rewards of up to $115,000 have been offered for information leading to the arrest and conviction of the person or persons responsible for the bombings.

She said law enforcement officials consider the attacks to be acts of domestic terrorism.

Taking it to the next level

Dr. Jerry Vlasak, a surgeon and spokesman for the North American Animal Liberation Press Office, an animal-rights group, said it is the researchers who are the terrorists.

"They take these sentient and intelligent beings and lock them up in sealed cages ... and eventually kill them and chop them up in little pieces."

Asked whether he supports the use of violence in furthering his goals, he likened his mission to those of anti-apartheid and civil rights activists.

"I understand why they're willing to do things like that when all attempts at public discourse and reason and discussion have been quashed," he said. "I understand why people would take it to the next level."

In a separate commentary in The Journal of Neuroscience, the Society for Neuroscience's outgoing chairman of the Committee on Animals in Research, Jeffrey H. Kordower, called for the National Institutes of Health to ensure the safety of researchers against animal-rights activists.

The federal government requires recipients of NIH grants, primarily universities, to have plans to protect patients undergoing clinical trials and to protect animals used in research. But there is no plan to protect researchers, he said in a telephone interview.

The request "has fallen on deaf ears," said Kordower, a neurologist who directs the Research Center for Brain Repair at Rush University Medical Center in Chicago, Illinois.

Though no one has been hurt, "the ... potential is that someone will be hurt in the near future," he said.

"As we have previously stated, the NIH is extremely concerned about acts of domestic terrorism against biomedical researchers," she said in a written statement. "In collaboration with the biomedical community, we have developed resources to help our grantee institutions prepare for and manage crises. NIH will continue its commitment to this policy in the interests of the safety of the researchers whose work it supports."

The issue is a critical one if science is to advance, said Society for Neuroscience President Thomas J. Carew.

"Responsible animal research has played a vital role in nearly every major medical advance of the last century, from heart disease to polio, and is essential for future advances as well," he said in a written statement. "Today, it is unacceptable that, in the pursuit of better health and understanding of disease, researchers, their families and their communities face violence and intimidation by extremists."

Vlasak said he had submitted a letter to the editor to The Journal of Neuroscience that said, "As unfortunate as it may be, all successful liberation struggles have had to incorporate the use of force in addition to rational and educated argument; after all, an oppressor never gives up his power until left with no alternative."

Vlasak said Journal editor John Maunsell rejected the letter, telling Vlasak in an e-mail, "We will not publish responses from commentators that appear to condone or encourage violence."

That sparked this missive from Vlasak back to Maunsell: "David Jentsch can torture and kill nonhuman primates year after year in his laboratory to allegedly study human addiction, but I refer to the historical use of force to overthrow oppression and you censor my letter?

"You wallow in hypocrisy, and refuse to acknowledge the suffering of any being besides those of your own species. Your attitudes and behavior will ensure the struggle continues, and hopefully escalates to encompass ever-more effective strategies."

Vlasak provided CNN with copies of his e-mail correspondence with Maunsell. A spokeswoman for the journal said it does not comment on potential submissions.

In a joint comment e-mailed to CNN, Jentsch and Ringach said, "It is not acceptable for Dr. Vlasak to talk about civilized public discourse out of one side of his mouth and describe violence against us as just and reasonable out of the other.

"People like him have deceived the public about the nature and benefits of biomedical research and, at the same time, we think his behavior has hindered the work of legitimate animal rights/welfare groups.

"It is critical that 'mainstream' groups sever their ties with violent individuals within their movement and publicly repudiate the acts of animal-right extremists and those that incite them from the sidelines. When that happens, scientists and animal advocates can get together to have a reasoned and civilized dialogue about these important issues."

The outspoken researchers are not alone. More than 10,000 people -- many of them scientists -- have signed a "Pro-Test Petition" that credits animal research with having "contributed ... to major advances in the length and quality of our lives."

It adds that "violence, intimidation and harassment of scientists and others involved in animal research is neither a legitimate means of protest, nor morally justified."

All About Animal Rights