NEW YORK (CNN) -- A small, rural town in the hills of New Hampshire was jolted by a home invasion over the weekend that left a mother dead and her young daughter severely injured. 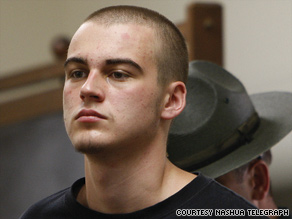 Steven Spader, 17, is accused of using a machete to kill a woman and injure her daughter.

"This type of murder does not happen very often," New Hampshire Senior Assistant Attorney General Will Delker said. "This is something out of the ordinary."

Four teenagers have been charged in connection with the incident early Sunday morning along an isolated dirt road in Mont Vernon, a town of about 2,000.

In a news release Tuesday, the New Hampshire Department of Justice identified the victim as 42-year-old Kimberly Cates. The medical examiner determined that she died from "multiple sharp injuries to the head, torso, left arm, and left leg."

"She's still in the intensive care unit," Delker said. "Her injuries weren't life-threatening, but you shouldn't minimize the severities of the injuries she suffered."

Delker said Kimberly Cates' husband was away on business at the time of the attack.

Cates was a registered nurse at St. Joseph Hospital in Nashua, New Hampshire.

"She worked part time in our maternal and labor department and also in our emergency department," Sarah Ward, director of marketing and communications for the hospital, said Tuesday. "The staff is pretty upset about it. They were pretty close to her."

"The people up here aren't used to this kind of thing," Don Himsel, senior photo editor for the Nashua Telegraph, said Tuesday. "This never really happens."

Himsel also said violent crime is extremely rare in Mont Vernon. "I think we may have had one assault in town in the last 10 years."

The Mont Vernon Congregational Church opened its doors Wednesday for people who want to grieve, pray and meditate.

"This is a way to come together peacefully; that's what we are trying to do," church official Jane Nilles said Wednesday. "The church understands that there are people hurting on both sides. This is a time to pray and ask for God's presence right now. It is a time to gather and to pray."

On Tuesday, the state Department of Justice announced the arrests of the four teenagers accused of taking part in the crimes.

William Marks, 18, and Quinn Glover, 17, were charged with burglary, conspiracy to commit burglary and armed robbery.

"The allegations are that Spader wielded the machete and Gribble used the knife, and each of them struck the victims," Delker said.

Delker, who described the case as being in its earliest stages, said prosecutors will evaluate whether additional charges will be brought or upgraded.

"Under New Hampshire law, anyone 17 and older is charged as an adult," Delker said.

A probable cause hearing for the suspects will be held October 20.

All About New Hampshire • Murder and Homicide