VICTORIA, Texas (CNN) -- The interrogation room inside the Victoria County Sheriff's Office is sterile and cold. There's a table in the middle, a one-way mirror and a hidden video camera that lets investigators watch suspects. 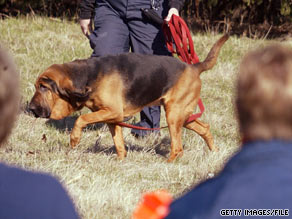 The Innocence Project of Texas has raised questions about using sniffer dogs to single out potential suspects.

Michael Buchanek knows the room well. He was part of countless investigations. Buchanek spent more than 25 years with the Sheriff's Office as a commander of operations.

But on March 16, 2006, Buchanek found himself sitting in the interrogation room. This time, he was on the other side of the table. The day before, his neighbor and friend, Sally Blackwell, was found strangled to death with a rope. Her body was left in a field five miles from her home.

Buchanek sat in the interrogation room with three homicide investigators, former brothers on the force. But the investigators were no longer friends. Buchanek was now the prime suspect in Blackwell's murder.

"They told me they knew I did it and that I was going to spend the rest of my life on death row," Buchanek told CNN.

The story of how a veteran law enforcement officer became a murder suspect is at the heart of a controversy over an investigative forensic tool called dog-scent lineups.

The Innocence Project of Texas calls the practice "junk science that's being used by prosecutors and judges to convict people." The nonprofit group, which is dedicated to discovering and overturning wrongful convictions, wants state governments to ban the use of dog-scent lineups. It says an unknown number of people have been wrongly accused or convicted from the dog-scent lineups.

Buchanek was identified as a murder suspect, not because of crime-scene evidence but because of two bloodhounds, "Jag" and "James Bond."

The dogs belong to Fort Bend County Sheriff's Deputy Keith Pikett. He and his team of dogs have become celebrities in Texas law enforcement circles for their work on hundreds of cases across the state.

In Buchanek's case, homicide detectives in this county southwest of Houston had Pikett's bloodhounds sniff crime-scene evidence, such as the rope used to strangle the victim. The dogs matched the scent to Buchanek.

Watch how an innocent man came under scrutiny »

Despite repeated denials, Buchanek lived under a cloud of suspicion for five months. His former Sheriff's Office colleagues believed the dogs over him and his pleas of innocence. But the dogs were wrong.

DNA evidence implicated another man, who pleaded guilty to the murder.

"It's left me with a pretty bad taste for law enforcement," Buchanek said. "It's pretty much ruined my life altogether."

Buchanek has filed a civil rights lawsuit against Pikett, the dog handler in Fort Bend County, as well as the Victoria Sheriff's Office and the Victoria Police Department. Buchanek is seeking unspecified damages claiming his constitutional rights were violated when he was falsely accused and that he suffered mental anguish as a result.

Pikett and his dogs have assisted in hundreds of investigations for law enforcement agencies across Texas. Pikett refused CNN's interview requests, but his attorney says Pikett is on the "cutting edge" of collecting dog-scent forensic evidence.

Buchanek accuses the investigators, including Pikett, of "leading" the dogs to his home because Buchanek knew the murder victim through work and church.

Pikett's attorney denies this. "The dogs were pulling him (Pikett)," said Randall Morse, the assistant county attorney in Fort Bend County who is representing the dog handler. "Pikett did not lead the dogs. The trail was valid."

Morse said Pikett is a respected officer of the law who has helped developed protocols for dog-scent lineups over the last two decades. "He's been accused 20 different ways of cheating; critics are trying to throw up smoke to get defendants off," Morse said.

Victoria County Sheriff T. Micheal O'Connor said dog-scent lineups, like other investigative aids, are a "vital tool in working toward a determination of a case." He opposes banning the technique.

"We will use them again if it merits this type of service," he said. "I feel they're credible. I've watched those dogs. I looked on in absolute amazement."

As for Buchanek's case, he said," We did the right thing, and the wrong person was not convicted."

Dog-scent lineups are similar to visual lineups; but instead of a witness picking a suspect from a group of people, bloodhounds walk along a line of tin cans containing individual scents from possible suspects.

Investigators get the scents from rubbing a gauze pad on someone's body or clothes, and that gauze pad is then placed in a tin can. The dog handler gives the bloodhound the scent they're looking for, and then the handler and animal walk down the line.

If the dog matches the scent, dog handlers say the animal will give a "sign," which is usually stopping at the can or barking.

The question over dog-scent lineups isn't isolated to Texas. The state attorney in Brevard and Seminole counties in Florida is reviewing 15 to 17 cases dating back to the 1980s. The cases involved forensic evidence provided by one dog handler and his bloodhounds. The Florida Supreme Court says Juan Ramos was wrongfully convicted of murder based on a dog-scent lineup.

Critics of dog-scent lineups say the problem is that dog handlers aren't certified or regulated and that there isn't a system in place to check a bloodhound's track record.

Steve Nicely is a professional dog trainer in Austin, Texas. He's trained police dogs for 30 years and is also an expert witness in Buchanek's case. Nicely argues there needs to be a system in place that tracks a dog's accuracy rate.

"There are no national standards," Nicely said. "Our standards are so lacking, it's pathetic. We should be ashamed of ourselves."

CNN's Wayne Drash in Atlanta contributed to this report.

All About Law Enforcement