Family of beaten teen hope for healing after death

(CNN) -- The family of a Chicago teenager whose beating death was caught on video hope that the attention the incident has garnered will spur healing locally, a relative said at a news conference Wednesday evening. 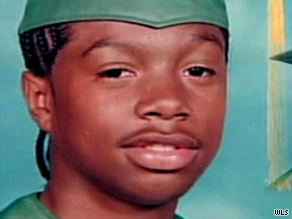 "It should've never happened, but it's never too late," said Rose Braxton, great-aunt of 16-year-old Derrion Albert. "It's time for healing to start getting our communities together so this won't happen to anyone else's child ever again."

Four suspects have been charged with first-degree murder in the September 24 killing of Albert, and police say they are looking for three more people in connection with the beating captured on videotape.

Prosecutors said that Albert, an honors student, was an innocent bystander who ended up in the middle of a street fight between two factions of students from Fenger High School.

The incident caught the attention of the White House, too.

The footage of the incident, which shows Albert being hit by a railroad tie, "is "chilling" and one of the most shocking things "you can ever see," White House spokesman Robert Gibbs said Wednesday.

President Obama's concern over the killing didn't provide additional comfort to the family, "but I'm glad that it's out there so everyone can see it and they know that, yes, this is happening," Braxton said.

"This was vicious. How do you just come out and decide that you're going to attack someone with a two-by-four?" Braxton said.

She spoke to reporters together with area community and church leaders.

"Maybe this will wake up and shake up people," the Rev. Jesse Jackson said at the press conference, noting that three teens were killed in Chicago this week.

Braxton said her message to the White House was simply, "Do something."

"We need to get to our children," she said. "Why are they so angry, so full of venom, that you would even consider doing something like that to another human being?"

Albert's funeral was scheduled for Saturday at 10 a.m. at Greater Mount Hebron Baptist Church in Chicago.

An amateur videotape shot by a witness, which has been broadcast widely, showed the attack unfolding. A local TV station that received the tape turned it over to police.

When school let out at 2:50 p.m. on Thursday, Albert was on his way to a bus stop when two groups of students converged on the street, said Tandra Simonton, spokeswoman for the Cook County States Attorney.

The factions, one that lived near the Altgeld Gardens housing development and one in an area known as "The Ville," began fighting after an earlier shooting that police called gang-related.

After being briefly knocked unconscious, Albert regained consciousness and tried to move from the fight, but was then attacked by a second group of five members from the opposing faction, Simonton said.

Chicago Police Superintendent Jody Weis said he asked the U.S. Secret Service to try to enhance the video so that others involved in the fight can be identified.

Weis pleaded with anyone who may have information not to withhold it. "The culture of 'no-snitch' is unacceptable," he said. "On Thursday, a young man with a promising future lost his life to senseless violence, yet few have come forward."

Authorities are also considering charging people who participated in the fight but did not come into contact with Albert, he said.

Asked about the killing as Obama prepares to travel to Copenhagen, Denmark, to lobby the International Olympic Committee to award Chicago the 2016 Games, Gibbs described the videotape of the attack as "among the most shocking that you can ever see."

"The killing of an honor student ... who's beaten to death, is chilling, chilling video," Gibbs said.

Obama has emphasized parental responsibility in addressing chronic problems in low-income urban communities including school dropouts, drug use, gang activity and violence. Gibbs offered no explanation for the Chicago killing, saying, "in many ways a lot of these crimes are amazingly hard to explain."

Whatever led to this specific attack, "you can't regulate the hard issue," Gibbs said.

All About Chicago • Murder and Homicide • Barack Obama