(CNN) -- Oscar-winning filmmaker Roman Polanski has been arrested in Switzerland on a decades-old arrest warrant stemming from a sex charge in California, Swiss police said Sunday. 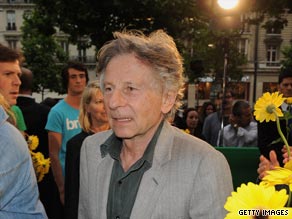 Polanski, 76, was taken into custody trying to enter Switzerland on Saturday, Zurich police said. A spokesman for the Swiss Justice Ministry said Polanski was arrested upon arrival at the airport.

He has lived in France for decades to avoid being arrested if he enters the United States and declined to appear in person to collect his Academy Award for Best Director for "The Pianist" in 2003.

The director pleaded guilty in 1977 to a single count of having unlawful sexual intercourse with a minor, acknowledging he had sex with a 13-year-old girl. But he fled the United States before he could be sentenced, and U.S. authorities have had a warrant for his arrest since 1978.

Watch what happens now for Polanski »

Polanski was nominated for best director Oscars for "Tess" and "Chinatown," and for best writing for "Rosemary's Baby," which he also directed. He was en route to the Zurich Film Festival, which is holding a Polanski tribute this year, when he was arrested by Swiss authorities, the festival said.

A provisional arrest warrant was issued last week out of Los Angeles, California, after authorities learned Polanski was going to be in Switzerland, Sandi Gibbons, spokeswoman for the Los Angeles County district attorney's office, told CNN on Sunday.

There have been repeated attempts to settle the case over the years, but the sticking point has always been Polanski's refusal to return to attend hearings. Prosecutors have consistently argued that it would be a miscarriage of justice to allow a man to go free who "drugged and raped a 13-year-old child."

The Swiss Justice Ministry said Polanski was put "in provisional detention." But whether he can be extradited to the United States "can be established only after the extradition process judicially has been finalised," a ministry spokesman said in an e-mail.

Gibbons said the extradition process will be determined in Switzerland, but said authorities are ready to move forward with Polanski's sentencing process, depending on what happens in Zurich.

Polanski was accused of plying a 13-year-old girl with champagne and a sliver of a quaalude tablet and performing various sex acts, including intercourse, with her during a photo shoot at actor Jack Nicholson's house. He was 43 at the time.

She added that Polanski did not strike her as the type of man who would force himself on a young girl.

Polanski pleaded guilty to a single count of having unlawful sexual intercourse with a minor.

There have been repeated attempts to settle the case over the years, but the sticking point has always been Polanski's refusal to return to attend hearings.

Espinoza also appeared to acknowledge problems with the way Polanski's case was handled years ago.

In the February hearing, Espinoza mentioned a documentary film that depicts backroom deals between prosecutors and a media-obsessed judge who was worried his public image would suffer if he didn't send Polanski to prison.

"It's hard to contest some of the behavior in the documentary was misconduct," said Espinoza.

But he declined to dismiss the case entirely.

Legal experts said such a ruling would have been extremely rare.

Samantha Geimer filed court papers in January saying, "I am no longer a 13-year-old child. I have dealt with the difficulties of being a victim, have surmounted and surpassed them with one exception.

Geimer, now 45, married and a mother of three, sued Polanski and received an undisclosed settlement. She long ago came forward and made her identity public -- mainly, she said, because she was disturbed by how the criminal case had been handled.

Following Espinoza's ruling earlier this year, Geimer's lawyer, Larry Silver, said he was disappointed and that Espinoza "did not get to the merits and consider the clear proof of both judicial and prosecutorial corruption."

He argued in court that had "Mr. Polanski been treated fairly" his client would not still be suffering because of publicity almost 32 years after the crime.

Polanski's arrest Saturday came two days after one of his wife's killers died.

The director's pregnant wife, actress Sharon Tate, and four others were butchered by members of the Manson "family" in August 1969. Polanski was filming in Europe at the time.

By her own admission, Susan Atkins held the eight-months-pregnant Tate down as she pleaded for mercy, stabbing the 26-year-old actress 16 times.