DALLAS, Texas (CNN) -- A terrorism suspect accused of plotting the bombing of a skyscraper made his first appearance in federal court Friday. 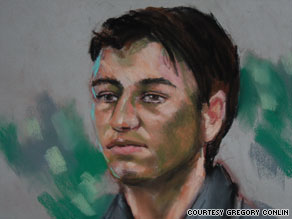 Hosam Maher Husein Smadi said through his lawyer that he understood the charges Friday.

Hosam Maher Husein Smadi, a 19-year-old Jordanian, said little during a 20-minute hearing at the Dallas federal courthouse. His lawyer, however, said Smadi understood the gravity of the charge.

Judge Irma Ramirez set a probable cause hearing for October 5.

Smadi initially drew authorities' scrutiny because of his violent posts on an extremist chat site, court papers indicate. He was arrested Thursday in a sting operation, the FBI said.

Federal officials said Smadi, who entered the United States illegally and lived in Texas, tried to set off an explosive attached to a vehicle at the base of the 60-story Fountain Place office tower.

Long before authorities arrested Smadi, however, they were following his Internet discussions, according to a court affidavit.

"Smadi was discovered by the FBI within an online group of extremists," the affidavit says. "Among many others in the group who espoused and endorsed violence, Smadi stood out based on his vehement intention to actually conduct terror attacks in the United States."

Undercover officers then contacted Smadi, posing as members of an al Qaeda sleeper cell. After months of conversations, the agents considered Smadi a legitimate threat.

Smadi picked several targets to attack, including the Dallas-Forth Worth airport, before deciding on the skyscraper, which houses Wells Fargo Bank, the affidavit says. It details a conversation that Smadi is said to have had with authorities:

"I have decided to change the target," he said, according to the affidavit. "God willing, the strike will be certain and strong. It will shake the currently weak economy in the state and the American nation, because this bank is one of the largest banks in the city."

Smadi said many times that he wanted to commit violent jihad and he was a soldier of Osama bin Laden, the affidavit says.

Undercover agents tried to get Smadi to "re-evaluate his interpretation of jihad," saying there were nonviolent ways to commit the act. But "Smadi again communicated his continuing commitment for violent jihad," the affidavit says.

After receiving what he thought was an explosive from an undercover agent, Smadi drove a car with the fake bomb into a parking garage under the skyscraper, authorities said.

Watch how a Jordanian was given fake explosive »

Smadi thought he could detonate the bomb by dialing his cell phone, they said.

When he dialed, the number rang a phone in authorities' possession, the affidavit says.

Counterterrorism officials arrested Smadi on Thursday before publicly disclosing a similar but unrelated terrorism sting arrest Wednesday in Springfield, Illinois. A federal law enforcement official familiar with the cases said authorities feared that word of the Illinois arrest could tip off the Texas suspect to the sting operation.

A charge of attempting to use a weapon of mass destruction carries a potential sentence of life in prison and a $250,000 fine.

All About Terrorism • Dallas (Texas)