AURORA, Colorado (CNN) -- An Afghan native facing terrorism charges planned to bomb a target in New York on the anniversary of the terrorists attacks of September 11, 2001, a federal prosecutor said Friday. 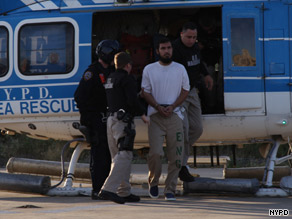 Najibullah Zazi gets off an NYPD helicopter in New York on Friday. He was taken to a Brooklyn detention center.

Najibullah Zazi intended to be in New York "with the intent of using" a bomb on September 11, federal prosecutor Tim Neff said during a court hearing Friday.

A federal judge ordered Zazi to remain in custody at the hearing. A few hours later, he left Colorado for New York, where a grand jury indicted him on one count of conspiracy to use weapons of mass destruction against unspecified targets in the United States.

Bill Muller of the U.S. attorney's office said Zazi's arraignment is scheduled for Tuesday at 11 a.m.

Prosecutors said in court that Zazi had been to Pakistan three or four times in the last decade and that he traveled to Canada twice.

Zazi was "a regular" at the Beauty Supply Warehouse here, one store worker said.

Another worker, who identified himself only as Oscar, said Zazi had made several recent purchases and told workers he had "a lot of girlfriends."

Employees at several beauty supply stores in Aurora told CNN that federal agents visited their stores as part of the investigation, which led to Zazi's arrest Saturday. Some visits by federal agents were as recent as last week, they said.

Federal agents visited at least two other stores in recent weeks, workers at those stores told CNN, while a third said it had received phone calls from the FBI. Store workers said agents showed them photographs of several people during one visit, and a worker at one store said he recognized Zazi after seeing pictures of him on television.

Video from Beauty Supply Warehouse in Aurora from July 25 and August 28 show a man believed to be Zazi in the store. In the first video, the man is seen at the checkout counter putting a hydrogen peroxide product bottle on the counter, while the rest of the bottles are in his cart. He also purchases hair rollers and pins and a shower cap.

The second video shows the same man walking up and down a store aisle until he reaches some hydrogen peroxide product bottles. He puts a dozen of them into his shopping cart.

Receipts from the store show that CNN obtained show that the man bought six bottles of peroxide in July, and a dozen in August. The store said it provided the same receipts to the FBI.

"They asked, 'Have you had any customers buying large numbers of hydrogen peroxide?' " he said.

Hoss said his staff examined its records and found they had video surveillance that appeared to correspond to the sales in question.

If convicted, the 24-year-old Zazi faces a potential sentence of life in prison.

"We believe any imminent threat arising from this case has been disrupted, but as always, we remind the American public to be vigilant and to report any suspicious activity to law enforcement," Attorney General Eric Holder said in a statement.

Zazi's father, 53-year-old Mohammed Wali Zazi, also from suburban Denver, and Ahmad Wais Afzali, a 37-year-old Muslim cleric and funeral director from the New York borough of Queens, also have been charged with lying to federal agents in the case. Both have been released on bond.

According to the indictment, nine pages of notes found on Najibullah Zazi's laptop computer include formulas for making triacetone triperoxide, or TATP. The highly volatile, highly explosive compound can be made from widely available chemicals, including acetone -- the main ingredient in nail polish remover -- hydrogen peroxide, flour and muriatic acid, a diluted form of hydrochloric acid used to clean metal.

TATP was used in the 2005 London transit bombings, the 2001 Richard Reid "shoe bomb" plot and other overseas attacks. The indictment states Zazi conducted Internet research on components for explosives and made several purchases of substances that can be used to make TATP and other explosives.

According to GlobalSecurity.org, an online resource for security information, TATP is extremely sensitive to impact, temperature change and friction. Just a few hundred grams of the material produce hundreds of liters of gas in a fraction of a second, the Web site reports.

The government has said in court papers that Zazi has extensive ties to Afghanistan and that his wife and children apparently live in Pakistan.

Zazi "and others" traveled to Pakistan in August 2008, returning in January 2009. While in Pakistan, he attended courses and received instructions on weapons and explosives at an al Qaeda training facility in one of Pakistan's northwestern tribal districts, federal authorities have said.

Zazi moved to the Denver area from New York shortly after returning in January and lived with family members. His father moved to Aurora in July, and they moved in together, the detention motion states.

In July and August, Zazi and unidentified others associated with him bought "unusually large quantities of hydrogen peroxide and acetone products from beauty supply stores" in the Denver area, investigators say in court documents.

Notes found on his computer mention that acetone is found in nail polish remover and hydrogen peroxide can be found in "Hair Salon 20-30%," and the "bomb-making notes contemplate heating the components in order to make them highly concentrated."

"The notes discuss formulations for mixing hydrogen peroxide with flour, and list ghee oil as a type of fuel that can be used to help initiate the explosive device," the government states. Ghee is clarified butter most often used in Indian cuisine.

In the documents, federal agents say Zazi checked into a hotel suite in Aurora that has a stove on August 28, the same day he was seen on surveillance video purchasing 12 large bottles of "Ms K Liquid 40 Volume," a peroxide-based product. He checked back into the same hotel suite on September 6-7. Testing later revealed the presence of acetone residue in the vent above the stove.

And Zazi searched the Web site of a home improvement store near the Flushing neighborhood of Queens for muriatic acid on September 8, the documents state. The following day, he started driving from Colorado to New York City in a rental car with his laptop, the memo says.

He arrived in Flushing, Queens, on September 10 and apparently became suspicious he was being tracked by law enforcement. He purchased an airline ticket and returned to Denver on September 12, two days before he was scheduled to turn in his car in New York.

He spent the night of September 10 at a Queens residence, where federal agents later found his fingerprints on a scale that FBI experts say could be used to weigh the ingredients for explosives.

Originally from Afghanistan, Najibullah Zazi and Afzali and are permanent legal residents of the United States. Mohammed Wali Zazi is a naturalized U.S. citizen.

Thursday, a federal magistrate in New York ordered Afzali released on bond. His attorney, Ron Kuby, has said his client was trying to help investigators find Najibullah Zazi, whose family had attended his mosque several years ago.

All About Colorado • U.S. Department of Justice • Terrorism