NASSAU, Bahamas (CNN) -- John Travolta spoke publicly for the first time Wednesday about his desperate efforts to save his teenage son's life after he suffered a seizure at the family's vacation home in the Bahamas in January. 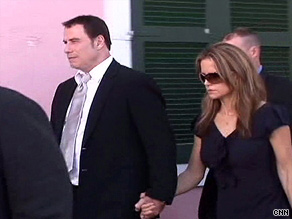 John Travolta and Kelly Preston leave a courthouse in the Bahamas Wednesday.

Travolta testified in the criminal trial of a paramedic and former Bahamian senator, who are charged with a plot allegedly designed to extort $25 million from the actor.

Travolta and his wife, actress Kelly Preston, have remained secluded for most of this year. Friends have described their deep grief over the death of 16-year-old Jett Travolta.

Jett was found unresponsive by a nanny at the home on the island of Grand Bahamas, where the family was spending a New Year's holiday, he said.

"We continued CPR and my wife was holding his head," said Travolta. His wife sat in the Nassau courtroom, sometimes crying as she watched the testimony.

Travolta said he initially told the ambulance driver to rush them to an airport where his private jet was parked. Travolta, who is a pilot, said he wanted to fly his son to a West Palm Beach hospital instead of driving him to one in Freeport.

The defendants -- paramedic Tarino Lightbourne and former Bahamian Sen. Pleasant Bridgewater -- allegedly tried to get Travolta to pay them $25 million to not make public a medical document about his son's death.

The judge told Travolta to return to the stand for more testimony Thursday.