(CNN) -- A Florida man admitted to reporters that he killed his wife and five "innocent" children, adding that he wants to be executed "right away" so he can be buried with them on Saturday. 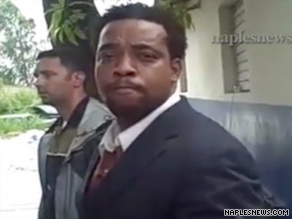 Mesac Damas spoke with reporters in Haiti, saying a "spirit" drove him to kill his wife and children.

Mesac Damas, 32, said he wanted to take his own life, but did not have the courage to go through with it, "because if you kill yourself, you're not going to heaven."

Damas made the statements to a Naples Daily News reporter as he was being led into a Haitian police vehicle in Port-au-Prince. Damas was returned to the United States late Tuesday following his capture in Haiti.

Damas faces six counts of premeditated first-degree murder in the deaths of his wife, Guerline Damas, 32; and the couple's five children -- Michzach, 9; Marven, 6; Maven, 5; Megan, 3; and Morgan, 11 months, police have said. The six bodies were found Saturday in the family's North Naples, Florida, home after relatives called police saying they had not been heard from.

Asked by the reporter in Haiti why he killed his family, Damas responded, "Only God knows." Questioned further, he blamed the crime on his mother-in-law. "Her mom pretty much made me do it -- the devil, her spirit, whatever she worships," he said.

Watch what Damas has to say »

Damas added, "When I did it, [my] eyes [were] closed but right now my eyes are open." He repeatedly asked the reporter, "Do you believe in Jesus Christ," and stated, "The devil exists."

Police said an arrest warrant was issued for Damas on Tuesday "based on information and evidence collected thus far in the investigation and statements made by Damas to a federal agent after his detention in Haiti."

Police have not said how the five were killed, but Collier County Sheriff Kevin Rambosk described the scene as "horrific."

The Naples Daily News, citing the warrant, reported that the woman and children were stabbed and their throats were slashed.

Damas had used a one-way ticket to fly from Miami to Haiti. Later, he told reporters that he had gone to Haiti to say goodbye to his family. He claimed that he had planned to turn himself in.

Police had asked the FBI and U.S. Immigration and Customs Enforcement for help in locating Damas. The FBI's legal attaché in the Dominican Republic notified authorities in Collier County, Florida, that a man believed to be Damas was taken into custody Monday by the Haitian National Police.

"Information obtained by [the sheriff's office] shows Damas was found hiding near a hotel in the capital city of Port-au-Prince," a sheriff's statement said Tuesday.

Watch In Session's report on Damas' detention in Haiti »

Police earlier said the judge who signed the arrest warrant ordered that Damas be held without bond upon his return to Florida. If convicted of six counts of first-degree murder, Damas could face life in prison or the death penalty.

Mesac and Guerline Damas had a history of domestic violence, police said. Mesac Damas was arrested in January, and in June he pleaded no contest to misdemeanor battery charges against his wife. Police said they did not believe he served any jail time, and did not think a restraining order was currently in place regarding the couple.

Guerline Damas' family released a statement Tuesday through the sheriff's office, saying she was "the best mother, sister and daughter in the world. She was caring and loving, and we miss her very much."

"This is a family tragedy and we want the community to realize that domestic violence is a serious issue," said the statement from the family. "If you have friends or family who are in an abusive relationship, please try to get them help. And to those women who are being abused, please love yourself enough to get help."

The family said its main concern was getting Damas back into the country "to face what he has done and get justice for our sister and daughter and her children. ... We ask that you keep our family in your prayers."

A family member had asked police to conduct a welfare check on the home Friday, saying they had not heard from a resident there, Roberts said. Responding officers knocked on the door and got no answer, he said, but they saw nothing that aroused their suspicions.

All About Murder and Homicide • Miami • Haiti