From Dugald McConnell
CNN's "The Situation Room with Wolf Blitzer"

WASHINGTON (CNN) -- Convicted "shoe bomber" Richard Reid was given permission to correspond from prison with members of his family this summer, after the Justice Department allowed restrictions on him to expire. 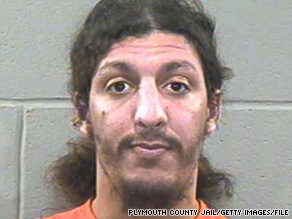 Richard Reid was arrested in December 2001, accused of trying to blow up a plane with explosives in his shoes.

"If a terrorist can communicate with his family, with other associates -- even with monitoring -- he could use codes; he could be directing other terrorist acts," said former New York City Police Commissioner Howard Safir, who is now a security consultant. "This is somebody who tried to blow up hundreds of innocent people on an airliner, and in my view, he should be totally restricted."

Safir first voiced his concern in an interview with the Boston Herald over the weekend.

The British-born Reid pleaded guilty seven years ago to trying to blow up a jetliner flying from Paris, France, to Miami, Florida, in December 2001 using explosives hidden in his shoes. He was sentenced to life in prison and is jailed at the high-security "Supermax" federal penitentiary in Florence, Colorado.

"The Situation Room with Wolf Blitzer"

Step into "The Situation Room" for a look at your world raw, unfiltered and live.
4 p.m. ET

A Justice Department spokesman said that after a thorough review, the special administrative measures that Reid had been under were not renewed in June, on the recommendation of three agencies: the FBI, the prosecuting U.S. Attorney's office and the Justice Department's Counterterrorism Section.

Reid had sued the Justice Department over the issue.

Even with the restriction lifted, Bureau of Prisons spokeswoman Traci Billingsley says, the only people a Supermax inmate can correspond with are his direct family members, his attorneys and the media.

In addition, "any regular inmates, especially terrorism convicts, have all their communications screened, both incoming and outgoing," she said.

"Those letters could be forwarded by family members to others," he said.

Another risk, according to Ervin: "The propaganda potential is huge for these kinds of things. Terrorists can be hugely inspiring figures" to young militants hearing jailhouse manifestos, he says.

Several years ago, three convicted terrorists from the 1993 World Trade Center bombing managed to send at least 90 letters to militants overseas, including those linked to the Madrid, Spain, train bombings. And according to a Justice Department's inspector general report of September 2006, one of them also "praised Osama bin Laden as a hero in a letter sent to Arabic newspapers."

But in the wake of that report, Justice Department spokesman Dean Boyd says, all phone calls and mail from international terrorist inmates are now screened.

"Mail is not delivered to or sent from such inmates until it is read (translated if necessary) and analyzed for intelligence purposes," with the help of FBI personnel and on-site Arab-language specialists, Boyd says. "If suspicious content is found, the correspondence is referred to the FBI for analysis before being processed any further."

All About Richard Reid • Terrorism