ANTIOCH, California (CNN) -- Investigators who completed their search of the California property belonging to kidnapping suspects Phillip and Nancy Garrido said initial findings do not connect the couple to the disappearances of two young girls. 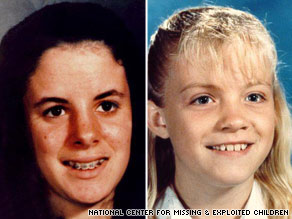 Ilene Misheloff, left, has been missing since 1989; Michaela Garecht disappeared in 1988.

But police said that they have not eliminated Phillip Garrido as a suspect in the decades-old cases.

Bone fragments found on the couple's property near Antioch could be human but are "far too old to be relevant in our cases," said Lt. Chris Orrey of the Hayward police department.

Teeth found on an adjacent property are most likely from an animal, she said. And some anomalies found by ground-penetrating radar uncovered "chunks of concrete, tree roots, and in one case a floor mat," Orrey said at a news conference.

Investigators had already found bone fragments at the property in unincorporated Contra Costa County, but have not said if they are human.

"Although nothing [was found] that would definitively link Phillip and Nancy Garrido to the disappearance of Ilene Misheloff or Michaela Garecht, we're going to continue to follow up on the evidence that we have recovered," Lt. Kurt von Savoye of the Dublin Police Department said at the news conference.

"We're going to examine and process all items that have been taken from this property to see if there is any possible link to the Garridos."

The processing of all the evidence could take several weeks, Orrey said.

Police from Hayward and Dublin began executing search warrants simultaneously last week on the Garrido property and an adjacent property to which he had access. They sought any evidence in the 1988 abduction of 9-year-old Michaela Garecht of Hayward and the 1989 disappearance of 13-year-old Ilene Misheloff of Dublin.

The search of the adjacent property was also completed and the resident will be able to return soon, police said.

The Garridos' home will remain boarded up and the fence locked, Orrey said.

The Garridos face a combined 29 felony counts in the 1991 kidnapping of Jaycee Dugard, then 11, from South Lake Tahoe, California. Authorities say the couple held Dugard in a hidden compound behind their home for 18 years and have said Phillip Garrido, a registered sex offender, fathered her two children.

Phillip Garrido won't be eliminated as a suspect because of similarities in the Dugard case and the other disappearance cases, Orrey said.

"I can't help but feel relief that they didn't find anything here," Michaela's mother, Sharon Murch, told reporters. "If they had found something on this property, it most likely would have meant Michaela wasn't alive."