NEW YORK (CNN) -- Four young men falsely accused of raping an 18-year-old student at Hofstra University were trying to return their lives to normal Friday after an ordeal that two of them described as traumatic. 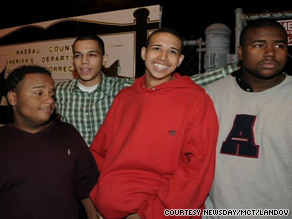 "I was really scared. I couldn't believe what was basically going through my mind. It was like a big nightmare, and I thought I was going to do time for something I didn't do," 20-year-old Kevin Taveras told HLN's "Issues with Jane Velez-Mitchell."

"It was devastating," he said. "I was there just letting the clock tick and tick."

Authorities dropped charges and freed the four men hours after their accuser changed her story about having been forcibly tied up and sexually assaulted in a dormitory bathroom.

"The woman admitted the encounters with each of the men were consensual," Nassau County District Attorney Kathleen Rice told reporters at a news conference Thursday.

The woman recanted her story Wednesday after authorities told her that part of the incident was recorded on a cell phone video, Rice said.

"That was when she began to tell the truth," she said.

Authorities have not released the accuser's name.

"I believe that it is a question of potential safety for her, and the investigation is ongoing," Rice said.

It is against the law to report a crime when none occurred, Rice said. Authorities gave no indication whether the woman may face charges.

"Her actions and her demeanor depict a very troubled young woman in need of much help," Rice said.

Hofstra University has suspended her pending hearings into the matter.

Only one of the four accused is a Hofstra student. He has been allowed to return to campus. None has publicly described what happened that night.

CNN affiliate WABC-TV of New York spoke with another of the accused, Stalin Felipe.

"We respect women," he said. "We know how to treat a lady. The thing they said with the rope, come on. That's disgusting. That's what we were looked at as: disgusting men."

"It did traumatize us," Felipe said. "I'm just happy to be home finally."

"It was traumatizing," he told the station. "It's supposed to be innocent until proven guilty."

They thought they might go to prison for 25 years for something they didn't do, Taveras said.

Taveras' attorney had sharp criticism for police in the case.

"They paraded their photos in front of the media. They held this press conference. They released all these terrible details about this alleged rape that never took place," Victor Daly-Rivera said.

At the news conference Thursday, the department's chief of detectives, Steven Skrynecki, explained how the investigation went in the wrong direction.

"Initially, the story that was provided to us matched some of the physical evidence that was collected," he said. "There wasn't a lot of physical evidence in this case, which made this case problematic, and which is one of the reasons why these types of investigations are always ongoing."

He added that some of the evidence "was not available to us initially, so our actions were based on a series of platforms. As information came to our attention, we evaluated that information and we took appropriate steps within that segment of the investigation."

"The heart-wrenching events of this past week have shocked, unsettled and saddened every member of the Hofstra community," he wrote. "As we work through this very difficult period, I ask that we come together as a community with shared values; that we make this a time of healing and that we find support and comfort from each other."

He added that Hofstra "is a very safe campus."