Coach found not guilty in death of player

(CNN) -- A jury Thursday acquitted a former Louisville, Kentucky, high school football coach of all charges connected to the heat-related death of a player last year. 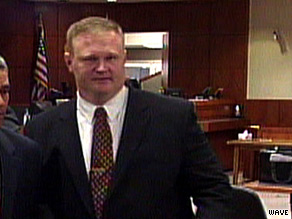 David Stinson leaves the courtroom Thursday after being found not guilty in the death of a high school player.

The jury found former Pleasure Ridge Park football coach David Jason Stinson not guilty of reckless homicide and wanton endangerment in the death of 15-year-old Max Gilpin, who collapsed during a practice on August 20, 2008. The teenager died three days later.

Stinson also was acquitted on a charge of wanton endangerment.

Watch Stinson after his aquittal »

Prosecutors said Stinson ran a tough practice on a hot day that made several of his players sick.

"The defendant said to his kids, 'We're going to run until someone quits,' " prosecutor Jon Heck alleged in his closing argument.

"A young man given that ultimatum, he ran until he collapsed. He turned white, his eyes rolled back. He could no longer support himself. ... He lost his consciousness, was ultimately taken to the hospital where his body temperature exceeded 107 degrees," Heck said of Gilpin.

The defense argued that nothing was wrong with the practice and that other factors may have contributed to Gilpin's heat stroke.

"We're the first place in this country to indict a coach for a homicide or a felony involving a practice that nobody says they would have stopped," defense attorney Alex Dathorne said in his closing argument.

The defense presented witnesses who said Gilpin had complained that he wasn't feeling well the day he collapsed.

Gilpin's parents have filed a wrongful death lawsuit against six coaches at the school. The suit claims they were negligent in their actions and that more than 20 minutes passed between the time Gilpin collapsed and the time one of the coaches called paramedics, according to CNN affilliate WHAS.

Stinson is the only person who has been charged with a crime.

Days after he was charged, Stinson told supporters that his "heart is broken." "Part of my life has been taken away," he said, according to WHAS. "I no longer teach, and I no longer coach at the school that I love. ...

"The one thing people keep forgetting in this is that I lost one of my boys that day," he said. "It was a boy that I loved and a boy that I cared for and a boy that meant the world to me. That's the thing that people forget. And that's a burden I will carry with me for the rest of my life."