(CNN) -- A November 10 execution date was set Wednesday for John Allen Muhammad, convicted in a series of sniper-style shootings that terrorized the Washington area in 2002. 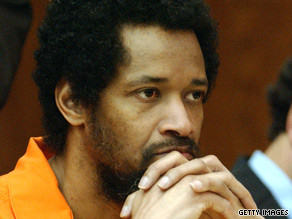 John Allen Muhammad, pictured in 2004, was convicted in the 2002 murder of Dean Harold Meyers.

Prosecutors had requested a November 9 execution date. That date is a Monday, Sheldon wrote in an e-mail to CNN.

"I pointed out that while I did not necessarily object to Monday, Nov. 9, executions are usually scheduled for Thursdays, and that often unpredictable events occur the day before an execution requiring action by the courts or governor, or others," he wrote.

"I asked that the execution be on a Tuesday so that government offices would be open the day prior to the execution. The [attorney general] did not object to this and the judge stated that it was a good idea."

On the Web site, Sheldon said he will file an appeal with the U.S. Supreme Court in October and ask Virginia Gov. Tim Kaine for clemency.

Muhammad, 48, was convicted in the murder of Dean Harold Meyers at a Manassas, Virginia, gas station. Meyers was killed by a single bullet, which became the signature of the two-person sniper team.

During a three-week period in October 2002, Muhammad and his young protege, Lee Boyd Malvo, shot 13 people, killing 10 of them, police said. The two also are suspected in other shootings, including ones in Tacoma, Washington; Montgomery, Alabama; and elsewhere in the Washington metro area.

Muhammad was convicted in the Meyers killing and in a murder in Maryland. Prosecutors called the second conviction "insurance" in case the Virginia conviction was overturned.

Malvo was convicted in one of the Virginia shootings and sentenced to life in prison.