NEW HAVEN, Connecticut (CNN) -- A quiet rendition of "Amazing Grace" capped an emotional candlelight vigil Monday night for slain Yale University student Annie Le, whose body was found on what was to have been her wedding day. 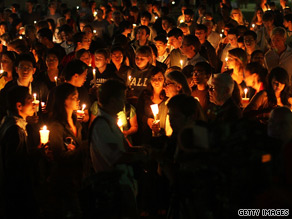 Several hundred people turned out on the Yale campus for the vigil, crying and hugging each other. Le's roommate, Natalie Powers, said the 24-year-old graduate student in pharmacology "was as good a human being as you'd ever hope to meet."

"She was also really tenacious and had a sense of humor that was never far away, and she was tougher than you'd think by just looking at her," Powers said.

"That this horrible tragedy happened at all is incomprehensible. But that it happened to her I think is infinitely more so. It seems completely senseless."

Connecticut state medical examiners announced Monday that the body found in a Yale medical research building over the weekend was that of Le, who had been missing for nearly a week. Her body was found Sunday hidden in a basement wall. Bloody clothes were found hidden above tiles in a drop ceiling elsewhere in the same building, investigators said.

Thomas Kaplan, editor-in-chief of the Yale Daily News, said Le "really had everything going for her."

"She was a top scholar. She was very outgoing, a warm person," Kaplan said. "You know, she was diminutive in stature, but certainly not in personality. And that's what I think just makes this so sad for everyone, regardless of whether you knew her. It's just a tragedy."

Le's death is being investigated as a homicide, but Connecticut medical examiners released no further information beyond the identification.

A candlelight vigil in her honor was scheduled for Monday evening on the campus.

A Yale professor said on Monday that the building has good security and only certain people can enter, let alone access certain areas. Professor Gary Rudnick, who interviewed Le when she applied for admission to the graduate program in pharmacology, said it gives him the sense that there could be a "murderer among us."

No suspects are in custody, but investigators are questioning several people in the case, New Haven Police spokesman Joe Avery said.

Watch a report about the case »

Kaplan said Le's killing has left Yale students shocked and wary. "Only Yalies had access to that basement, and that seems to point to someone in our community being involved in this," Kaplan said. "That's what is so frightening."

Authorities have not described the clothes that were found, nor said to whom they may have belonged. Teams of investigators at a Connecticut State Police lab worked through the weekend processing and examining the blood-stained clothes.

Kaplan said a Yale police official told the newspaper the clothes were not what Le was wearing when she entered the building.

At a meeting Monday for members of the campus community, Yale officials discussed security and provided an update on the investigation. A faculty member and a student who attended the meeting told CNN that Yale officials said police have narrowed down suspects.

Security cameras captured video of Le as she entered the four-story lab building at 10 Amistad Street, about 10 blocks from the main campus, six days ago. After poring over hours of surveillance tapes, authorities said they had not found images of her leaving the building.

Rudnick described security in the building as "very good." It had restricted access, and simply having a Yale ID card was not enough to get in, he said. Within the building, one had to have special access to enter certain areas, he said.

Le was to be married Sunday on New York's Long Island to Jonathan Widawsky, a graduate student at Columbia University.

"Annie has been planning this wedding for over a year with John, and she was very excited. She's been doing a countdown to her wedding day," Jennifer Simpson, a friend in Sacramento, told the CBS "Early" show. "She was doing weather patterns to make sure that the weather would be perfect on her wedding day. She just wanted everything to be perfect, everything down to table napkins, to flowers. Annie was very, very excited about this day."

Yale University President Richard Levin, in a statement to the campus community, said, "Our hearts go out to Annie Le's family, fiancé and friends."

The school sent out information Monday from Vice President and Secretary Linda Lorimer saying, "We are cooperating in all possible ways with the police to ensure they find every shred of physical evidence in the building so they can solve this horrible crime without delay. When the building does reopen, there will be extra security both inside and outside the facility for the foreseeable future."

Lorimer added, "To augment the substantial security already in place at the Medical School, Yale moved last week to increase security and police patrols on the streets in the area and to add a new bicycle patrol. Yale also added security personnel inside Sterling Hall of Medicine, where Annie Le had her lab."

The school has made grief counselors available, as well as a 24-hour help line number. "The university chaplain's office is available to offer pastoral counseling and can put members of the community in contact with those of many faiths and denominations," the message from Lorimer said.

Le, a resident of Placerville, California, seemed to have been well aware of the risks of crime in a university town.

In February, she compared crime and safety at Yale to other Ivy League schools for a piece for B magazine, published by the medical school.

Among the tips she offered: Keep a minimum amount on your person.

And she practiced what she preached, Simpson told the "Early" show.

"Annie always made sure she was safe," Simpson said. "She doesn't walk around at night by herself. If she had to work late, she would make sure someone could come pick her up or walk with her."

When she walked over to the research building on Tuesday, she left her purse, credit cards and cell phone in her office.

Vanessa Flores, Le's former roommate, wondered whether the magazine article had something to do with Le's death.

"The only thing I can possibly think of right now is maybe a psychopath, an antisocial person who -- I don't know -- maybe got upset about what she wrote about back in February about not being safe, and just kind of wanted to prove her wrong."

Le, originally from California, graduated from Union Mine High School in 2003, where she was named "Best of the Best," and "Most Likely To Be The Next Einstein."

Le set the bar high for herself, writing in her profile for the National Institutes of Health that she was interested in studying and researching regenerative medicine and hoped to remain working at at NIH or become a professor.

Her friends remembered her as one of the nicest people they had ever met.

Laurel Griffeath, a high school friend, told NBC's "Today" show in Le had a beaming personality matched with impressive intelligence, a girl who "had it all."

"Annie was just an amazing person, and I know that when tragedies happen, people always say that, but she truly was," Griffeath told the "Today" show. "She was probably the most brilliant person I've ever met in my life, but what made her more amazing was that there was an intersection of intelligence and personality and ability and she worked hard and she was great with people and she cared about people and she was funny and she didn't sacrifice one part of her life for another like a lot of people kind of seem to.

"She just really kind of had it all. She was really amazing."