NEW YORK (CNN) -- Art Capital Group has withdrawn its lawsuit against celebrity photographer Annie Leibovitz and extended the due date for repayment of her $24 million loan, the two sides announced Friday. 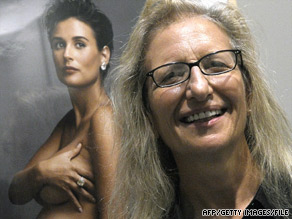 Annie Leibovitz appears before her photo of Demi Moore during an exhibition of her work in June in Madrid, Spain.

It is part of an agreement reached between Leibovitz and Art Capital Group, which restructured her debts, according to a joint statement from the two sides.

Under the agreement, Art Capital also agreed to extend the maturity date for the loan it provided to Leibovitz, which was originally due on Tuesday. The statement did not say when the loan is now due.

In addition, Leibovitz bought back from Art Capital the rights to act as exclusive agent in the sale of her pictures and her property, the statement said.

"Ms. Leibovitz will therefore retain control of those assets within the context of the loan agreement which shall prevail until satisfied," it said.

Art Capital Group said Leibovitz initially approached the company, an adviser to artists and art owners, around June 2008 regarding her "dire financial condition arising from ... mortgage obligations, tax liens and unpaid bills to service providers and other creditors," the complaint said

In July, Art Capital filed a complaint with the New York Supreme Court, asking it to uphold the sales agreement it signed with Leibovitz, including its right to sell her art and real estate.

Leibovitz, who has photographed everyone from the Rolling Stones to Queen Elizabeth, put her art, intellectual property and even real estate assets up for collateral last year when she consolidated her massive debts.

"In these challenging times, I am appreciative to Art Capital for all they have done to resolve this matter and for their cooperation and continued support," Leibovitz said in the joint statement.

"I also want to thank my family, friends, and colleagues for being there for me and look forward to concentrating on my work."

The tone of the agreement differed markedly from that of a complaint filed July 29 in New York Supreme Court by Art Capital Group, in which the company accused the photographer of "willful and flagrant" breaches of her agreement, adding: "It appears that Leibovitz entered into the sales agreement with no intention of performing or permitting performance under it."

One of Leibovitz's best-known photos is of John Lennon with his wife, Yoko Ono, shortly before the Beatles star was assassinated in 1980.

She is no stranger to controversy.

In 1991, Leibovitz photographed a nude and extremely pregnant Demi Moore for the cover of Vanity Fair. The issue, considered scandalous at the time, was sold in many places nationwide with a sheath of white paper.

Watch more about the suit she faced, controversy she's stirred »

Last year, Leibovitz photographed Disney star Miley Cyrus wrapped in a bedsheet, eliciting claims that the photographer pressured the teen queen into poses that were too provocative for her young age.