(CNN) -- The bone fragment found near the California home where Jaycee Dugard is said to have been confined for 18 years is "probably human," a sheriff's spokesman said Tuesday. 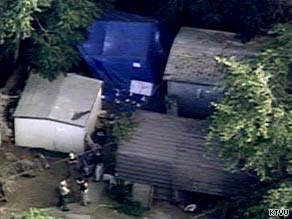 Jaycee Dugard was locked in a shed tucked under a blue tarp in her alleged captor's backyard.

Investigators said they found the bone last week on a neighbor's property in an area that Dugard's accused captor and rapist, Philip Garrido, had access to.

The fragment, which was analyzed by an outside expert, will go on to the state DNA lab for testing, Jimmy Lee, director of Public Affairs for the Contra Costa County's Sheriff's Office said in an e-mail.

"The expert has determined that the bone fragment found in the backyard of Garrido's neighbor is probably human," Lee said.

"We will be requesting the state to see if it can develop a DNA profile on the fragment. It should be noted that it is not uncommon to find Native American remains in Contra Costa County," he said.

Garrido and his wife, Nancy, have pleaded not guilty to 29 felony charges, including rape and kidnapping, stemming from Dugard's disappearance when she was 11 years old.

Investigators believe Garrido kidnapped Dugard in 1991 in South Lake Tahoe, California, fathered two daughters with her and held her captive in a well-hidden compound behind his home in Antioch.

After the Garridos were arrested in August, investigators used cadaver dogs to search the couple's ramshackle home and the surrounding rural property for possible connections to unsolved crimes.

Police in Hayward, California, are trying to determine whether Garrido is linked to the 1988 kidnapping of Michaela Garecht, Hayward Police Lt. Chris Orrey said last week.

Garecht and Dugard were of similar age and appearance, both were abducted in daylight and a sketch of a suspect resembled Garrido, Orrey said.

In Dublin, California, investigators said last week they were looking into whether Garrido was connected to the 1989 disappearance of Ilene Misheloff, who was 13 when she was abducted.

Garrido was convicted of kidnapping and raping Katie Callaway Hall in 1976. He was released from prison after serving 10 years of a 50-year sentence. He was labeled a sex offender and put on lifetime parole.