(CNN) -- She was 24, a newlywed who moved to Orlando, Florida, with her husband just a few months before she vanished in May 1994. In the 15 years since, there have been no clues or signs of Melisa Brady Sloan, despite periodic searches. 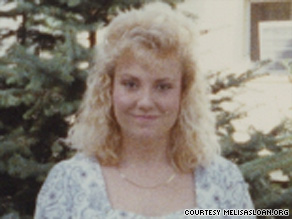 Melisa Sloan has been missing since May 1, 1994. Police in Orlando, Florida, are seeking the public's help.

The native of Louisville, Kentucky, was close to her family and a devoted nurse working long hours at Orlando Regional Hospital. She disappeared just 10 days before she was due in court to testify against her husband in a domestic violence case.

"She loved him and wanted to work things out with him," says Melanie Brady Drury, Sloan's sister.

It was a whirlwind romance, Drury said. The two met in Louisville, where Melisa was a nurse and John Sloan was a night security guard at the same hospital. He said he had just been discharged from the Army Special Forces.

They dated only a few months before marrying quickly. Within weeks of the wedding, they moved to Orlando. Her family was concerned about the move because they barely knew this new man in Melisa's life.

"He was very controlling of her, and that's when the physical violence between them began," Drury said.

In early spring 1994, Melisa Sloan called police, saying her husband had beaten her up at their home. According to Drury, Melisa left him and went back to her family in Louisville, but returned a couple of weeks later hoping to work things out.

The first week of May, her mother tried calling Sloan but could not reach her for days. On May 7, she finally spoke with her daughter's husband, who said, "She'll call you when she's ready," Drury said. It was then that the family grew worried and reported Sloan missing to police.

According to police, Melisa Sloan was with a good friend when she was last seen by anyone other than her husband. She and the friend, a paramedic who worked at the hospital, left work together to go to a street fair, and Sloan did not return home until 2:30 a.m., police said.

Watch for more details on the case »

The next afternoon, she was captured on a video surveillance camera withdrawing $20 from an ATM.

At the Sloans' apartment, police found none of Melisa's personal items, clothes or shoes. The apartment looked as if she had never lived there. All that was left was an old bathrobe, hung on the back of the bathroom door, and her beloved cat, police said.

"She would never leave that cat behind, that cat was like her baby," said her sister, Drury. As police searched the home, they found that one of the bedrooms was unfurnished, with only a rifle and knife propped against a wall, said Detective Andre Boren of the Orlando Police.

"We searched for days in the woods behind their apartment," Boren said. Three searches have been conducted over the years on the land behind the Sloans' home. The 1-square-mile parcel is federal property. Nearly 75 percent of the property has been searched, Boren said.

According to investigators, there was no activity on Melisa Sloan's credit cards, bank accounts, Social Security number or driver's license. Her car was left parked in front of their home.

Police quickly focused on John Sloan and named him a person of interest in his wife's disappearance.

The phone listed in Sloan's name has been disconnected. He did not respond to e-mails from CNN, or to messages sent through his father.

Police say John Sloan has not cooperated with them since the initial questioning. When police first came to the Sloan's home when she was reported missing by her family, he told police his wife had packed up and left with another man. Since then he has refused to speak with police.

Last year, homicide detectives attempted to question Sloan in Bellingham, Washington, a city near the Canadian border where he now resides with his new wife and family, but he walked away without answering questions from police.

"We are not resting until we solve this case, and I believe the key to this case is her husband," Boren said. "We've made contact with his current wife, who is now aware of the situation, and we hope she will shed some light for us."

Anyone with information about the whereabouts of Melisa Brady Sloan is asked to call the Orlando Police Department at 321-235-5300.