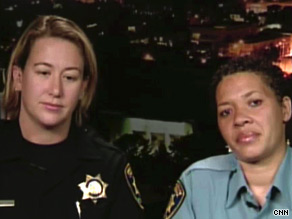 The University of California, Berkeley, police officer was sitting in on a meeting with a man named Phillip Garrido, who wanted to hold an event on campus, and Lisa Campbell, special events manager for the university police. Garrido brought along two young girls, introducing them as his daughters.

Jacobs' and Campbell's intuition, authorities said, led to the arrest of Garrido, a registered sex offender who along with his wife, Nancy, now faces 29 felony charges in connection with the 1991 kidnapping of Jaycee Dugard, who was then 11. Both have pleaded not guilty.

Police have said Garrido kept Dugard in a series of sheds in his backyard for 18 years, fathering two children with her -- the 11- and 15-year-old girls he brought with him to the meeting.

In a Friday interview with CNN's "AC360," Campbell said Garrido had approached her August 24 with the two girls in tow, asking about holding his event. She had another commitment, so she asked him to return the following day.

Watch the officers talk with Cooper »

"He was clearly animated, he was very passionate, he was full of life about the things he wanted to talk about," Campbell said. "The girls sort of were recessed in the background. And they were young. It was one o'clock in the afternoon. They weren't in school. They were pretty much unresponsive emotionally, extremely pale ... there was just something about the girls that wasn't right."

She thought the encounter was strange enough to run a background check on Garrido, which revealed that he was on parole after a rape conviction and was a registered sex offender. Campbell asked Jacobs to sit in on the meeting the next day.

Jacobs said she began talking to the girls, trying to engage them in conversation. Checking for any abuse, she asked one girl about a bump on her eye, and the girl told her it was a birth defect, she said.

"The youngest girl was across from me," Jacobs said. "And she was very intently staring at me and smiling in a very eerie way. The older daughter was looking at Mr. Garrido, and not looking at us, not making eye contact with us. And her eyes were darting around at the ceiling, and [she] would give really quick, clipped one-word answers and would glance at us and back up at him."

She said, "My police intuition was kicking in, but I would say it's more of a mother's intuition. I was worried for these little girls. I knew something wasn't right. I could kind of see it in their eyes, although I really didn't know what it was. And just being the protective mom that I am, my reaction was to try and do what I could to help them."

Jacobs called Garrido's parole officer to tell him about the meeting. "And he stopped me dead in my tracks," she said. "And he said, 'He doesn't have daughters.' And that's when my heart kind of sunk down into my stomach. And I said, 'Well, he introduced them as his daughters. They had his blue eyes. They were calling him "Dad." They even mentioned an older sister at home. So I had no reason to believe that they were anything but his daughters.' "

The parole officer called Garrido in for a meeting Wednesday. He attended, along with his wife, the two girls and another woman named Allissa, police have said. "Allissa" was eventually identified as Dugard. Scott Kernan, undersecretary of the California Department of Corrections and Rehabilitation, told reporters Thursday that Garrido admitted abducting Dugard.

"The parole agent called me on my way home from work," Jacobs said Friday. "And he was all excited ... and he said that ... he was involved with a kidnapping case and ... because I called it in, it helped solve this FBI case that was 18 years old."

"We're never going to forget this day," she said. "And I'm glad that Jaycee is safe and working on her road to recovery."

Police acknowledged Friday that someone called 911 in 2006 to report that children appeared to be living in tents in a neighbor's backyard. Contra Costa County Sheriff Warren Rupf told reporters a deputy visited the Garrido home after the call, but did not go in the backyard. "This is not an acceptable outcome," Rupf said.

In a jailhouse interview Thursday with CNN affiliate KCRA, Garrido would not discuss the abduction, but said he had "completely turned" his life around in the past several years.