(CNN) -- In an anguished 911 call, a Georgia man told dispatchers that he arrived home to find "my whole family's dead." 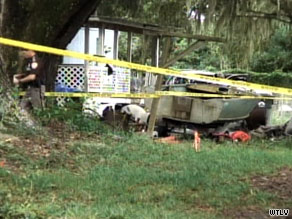 Seven people were found dead Saturday at a residence in a mobile home park in Brunswick, Georgia.

"I just got home," a man identified as Guy Heinze Jr. told the emergency dispatcher in the Saturday call, released Monday by authorities. "I was out last night. I got home just now, and everybody's dead. ... My whole family's dead. It looks like they've been beaten to death."

Seven people were found dead Saturday at a residence at the New Hope mobile home park in Brunswick, Georgia, authorities said. Two others were hospitalized in critical condition; one of them, identified by police as 19-year-old Michael Toller, died Sunday.

A neighbor of Heinze's placed the call and put him on the phone, as well as the mobile home park's maintenance man. The park manager also called 911, sobbing as she told dispatchers, "Please hurry."

Listen as the 911 operator hears a family has died »

Police said Sunday that they have "no known suspects" in the case.

"We are not looking for any known suspects," Glynn County Police Chief Matt Doering said. "That doesn't say that there are no suspects. They're just not known to us."

Heinze was arrested Saturday night and faces charges of possessing a controlled substance and marijuana, as well as evidence tampering and making false statements to a police officer, Doering said.

He said Heinze has been cooperative and stopped short of naming him a suspect in the deaths.

"We're still looking for anybody and everybody that may be related to this," he said. "That naturally includes [Heinze]. Of course we're looking at him."

"It's a house full of people that live there," the neighbor said during the call. "I know there's a baby. I don't know if the baby was in there or not."

Heinze got back on the phone to talk to a supervisor, repeating that Michael was breathing, although he appeared to be having trouble breathing and needed an ambulance. The dispatcher assured him that help was on the way and tried to question him gently.

"People's beat," Heinze said. "Everybody is dead." Asked what the mobile home looked like, he yelled, "It looks like a [expletive] murder scene."

At the dispatcher's suggestion, Heinze tried to question Michael, asking him, "Where do you hurt?" There was no response.

Doering said Sunday that police think at least one person not in custody may have information in the case.

Authorities have not released the identities or ages of the other victims, revealing only that they range in age from children through mid-40s. One additional victim was identified, Doering said Monday, but he did not release that person's name pending notification of relatives.

Autopsies on the victims began over the weekend in Savannah, Georgia, and continued Monday, Doering said.

Police had been called to the home before, Doering said, but would not say why.

He was tight-lipped Sunday about many aspects of the case, refusing to say how the victims died or to give a breakdown of male and female victims. All nine victims lived in the mobile home, he said, and police do not believe that any of them conducted the assault.

He said police are making progress and have narrowed down the timeline for when the deaths occurred.

Brunswick is about 300 miles southeast of Atlanta, on the Georgia coast.

All About Murder and Homicide • Georgia