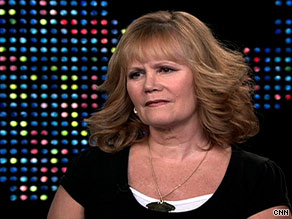 Katie Callaway Hall said she wanted to scream when she heard that Phillio Garrido kidnapped someone else.

His name sent a flurry of emotion running through her mind.

She has thought about him every day since November 22, 1976 when he asked her for a ride at a supermarket in California, before handcuffing her, binding her and taking her to a mini-warehouse in Reno, Nevada, where he raped her.

Garrido was convicted for kidnapping and raping Hall, but was released after serving just over 10 years of a 50-year sentence. He was labeled a sex offender and put on lifetime parole.

"In many ways, the capture of Phillip Garrido has closed a chapter in my life," Hall wrote for a Larry King blog. "I don't have to hide anymore. I don't have to live every day of my life wondering if he is looking for me. I am finally free from the fear I have lived with since the day I learned he was paroled." Read what Hall wrote on the blog

Garrido and his wife, Nancy, were charged last week with crimes relating to the abduction of 11-year-old Jaycee Lee Dugard in 1991 and her captivity in a hidden shed-and-tent compound in the couple's backyard in Antioch, California.

"With all the joy I should feel, I want to scream from the depths of my soul," she said. "Scream because my fears turned out to be justified -- he struck again."

While Hall has tried to suppress some of the memories of what happened to her that night, Garrido's arrest took her mind back to that night in November.

"A man tapped on my window and asked for a ride," she said. "I agreed."

When she stopped the car to drop him off, Garrido took the keys out of the ignition, according to court documents from Garrido's appeal in the case.

Garrido, then 25, "told [Hall] it wasn't intentional that he had taken her, but that it was her fault because she was attractive," according to the documents.

"Soon after, I was cuffed, bound, gagged, and taken to a warehouse," Hall told CNN.

She was kept in the 6 by 12-foot storage facility, which Hall remembers was stacked with half-opened boxes with China-type dishes inside.

Large, heavy carpets were hanging from the ceiling, spaced apart every few feet.

"It was like a maze," she said. "And in the back of the mini warehouse where he had me, he had it set up to keep someone for awhile."

"Most of the details about what happened to me after I entered that warehouse have been repressed."

She told Larry King that she feared for her life.

Hall was held in the small storage facility for five hours before she heard a noise.

"My recollections begin around 3 a.m. Someone banged on the door. I remember thinking, 'Oh my God, his friends are coming,' " she said. "Garrido said, 'Do I have to tie you up or are you going to be good.' "

She told him she would be good, but she knew if it was the police banging outside, she was going to "have to try something."

"I barreled my way out of the warehouse completely naked. I could see the officer and Garrido standing there. They both looked at me like I was crazy," she said. "I couldn't see the officer's car. I thought 'Oh God, he's not a real cop.' My state of mind was such that I couldn't fully embrace what I was seeing. Finally, I saw his police car."

Garrido tried to tell the cop Hall was his girlfriend.

Half-dressed, Hall said she maneuvered past him and asked the police to keep him away.

"They asked if I was brought there against my will," she said. "I told them I was, that he had handcuffed and bound me. An officer shined a light on my wrists, saw the sores from the handcuffs, and arrested Garrido."

Though Garrido was put behind bars for what he did, Hall said that night changed her life forever.

"For years, I walked around like a zombie," she said. "I had to tell everyone I met what had happened to me -- because I didn't feel like myself. It was as if I had to explain why I wasn't 'normal.' "

For her, that's the biggest pain Garrido put her though.

"I was a good person. I lived right, and treated others well," she said.

"He changed my life in an instant. I don't feel like I can ever be that person again. Being victimized is something that only a victim can understand. I hate that he did this to me, and I doubt I'll ever get over it."

Though the trauma of her kidnapping has stayed with her all of these years, Hall said she couldn't even begin to imagine the pain Garrido has caused Dugard and the two children she had with him.

"The only thing I can think of worse than what happened to me, is it happening to my child," she said. "I can't imagine what Jaycee is going through. He had me for 8 hours. He had her for 18 years.

"I was an adult, with instincts that helped me deal with the situation. She was a child. This is going to be with her for the rest of her life. I can only wish her the best."