Alleged kidnapper couple met while man was in prison

(CNN) -- Phillip Garrido and his wife, Nancy, met while he was in a federal prison serving time for abducting a different woman from South Lake Tahoe, California, and holding her captive in a storage unit, Nevada probation and parole officials said Friday. 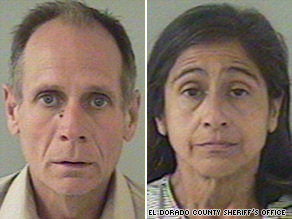 Details of Phillip Garrido's past began to emerge after he and his wife were charged with crimes relating to the abduction of 11-year-old Jaycee Lee Dugard in 1991 and her captivity in a hidden shed-and-tent compound in the couple's backyard in Antioch, California.

Garrido's record as a registered sex offender began with a 1977 conviction on charges of kidnapping and rape of a South Lake Tahoe woman, the Nevada Department of Public Safety's Division of Parole and Probation said in a press release.

The victim was found with Garrido inside a mini warehouse, a type of small storage facility, in Reno. Nevada, according to court documents from Garrido's appeal. She was raped inside the storage unit, according to the documents.

The woman, a 25-year-old casino worker, picked up Garrido at a supermarket near Lake Tahoe on Nov. 22, 1976, after he asked her for a ride. The documents state that when she stopped the car to drop him off, Garrido handcuffed her, bound her legs and neck with a leather strap, and drove off with her to Reno.

Watch more about the psychological effects of being held captive »

Garrido, then 25, "told the victim it wasn't intentional that he had taken her, but that it was her fault because she was attractive," according to the documents.

Garrido served 11 years of a 50-year sentence in Levenworth, Kansas.

Parole officials said he met his wife, Nancy, while he was in prison, but they didn't give details.

"He had a motorcycle accident and got on LSD and he's not in his right mind," Manuel Garrido said. "He was in a bad accident and hit his head and then got on LSD in high school. That was the end. He went to selling dope. He went crazy."

Though he hasn't spoken to his son for 20 years because they "didn't get along" and has never been to the home where his son is accused of holding Dugard, Manuel Garrido said he wasn't surprised to hear about accusations.

"I wasn't surprised because I know he's out of his head for God's sakes," he said. "He was an angel when he was young and it's a damn shame."

Phillip Garrido's father also said his son believes "he talks to God and he can do things."

And Garrido apparently maintained a blog where he discussed talking to God and also claimed he could control sound with his mind.

Watch more about the blog »

Garrido's blog entries are posted by "THEMANWHOSPOKEWITHHISMIND." He refers to "God's Desire," which is a church based out of his home in Antioch, according to CNN affiliate KCRA of Sacramento.

In a post on August 14, he writes that during a "powerful demonstration" in July in Pittsburg, California, "the Creator has given me the ability to speak in the tongue of angels in order to provide a wake-up call that will in time include the salvation of the entire world."

"You too can witness what the world believe's [sic] is impossible to produce!" he writes, providing an e-mail address. "DON'T MISS OUT!"

Several news outlets, including The New York Times, have reported on the blog since the case started making international headlines Thursday.

In another blog posting last year, Garrido claims to have a "new insight that has the potential of helping people who hear voices to possibly stop and re-examine their thinking before committing a violent act on themselves and/or others."