NEW YORK (CNN) -- Dominick Dunne, the former Hollywood producer and best-selling author known for his Vanity Fair essays on the courtroom travails of the rich and famous, died Wednesday in New York city after a long battle with cancer. 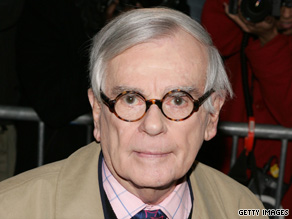 Dunne, who described himself as "a high-class Zelig," was 83.

Called "Nick" by his friends, Dunne was putting the finishing touches on his final novel, which he said he planned to call "Too Much Money," when his health took a turn for the worse.

He flew to Germany earlier this month for another round of stem cell treatments at the same Bavarian clinic where the late Farrah Fawcett was treated. He was hospitalized upon his return to New York, then sent home.

As a correspondent for Vanity Fair magazine, Dunne was a fixture at some of the most famous trials of our times -- Claus von Bulow, William Kennedy Smith, the Menendez brothers, O.J. Simpson, Michael Skakel and Phil Spector.

He discovered his magazine writing career in his 50s, through personal tragedy -- his daughter's murder.

Watch why Dunne says he started writing about crime »

He vented his anger at the legal system in "Justice: A Father's Account of the Trial of his Daughter's Killer," following the murder trial of John Sweeney, the estranged boyfriend who strangled 22-year-old Dominique Dunne, in 1982. Sweeney spent fewer than three years in prison.

Dunne's article was published by Vanity Fair and he accepted then-editor Tina Brown's offer to write full-time for the magazine. Calling himself a "diarist," Dunne dropped bold-faced names as he spilled behind-the-scenes nuggets gleaned from courtrooms and dinner parties alike.

"It is fair to say that the halls of Vanity Fair will be lonelier without him and that, indeed, we will not see his like anytime soon, if ever again," said editor Graydon Carter in a tribute posted on the magazine's Web site.

He bristled at one writer's oft-repeated description of him as "Judith Krantz in pants." He preferred to be known as a crime victim's advocate and frequently spoke at events sponsored by victims' groups.

The fact he personally knew many of the people he wrote about set Dunne apart from other crime writers.

Dunne wrote that he met music producer Phil Spector for dinner three times during the Simpson murder trial. "He knew every detail of the trial and story," Dunne wrote. "He carried a gun when we saw each other, but he never pulled it on me." Spector later became a defendant in a trial Dunne covered.

Dunne spoke to CNN in June, while promoting the DVD release of a documentary of his life called "After the Party." At the time, he said he was feeling well, happy, and hopeful the treatments were working. "I'm pro stem cell," he said.

But even then, he seemed to know he was in a race against time. "I want to have one more best seller, before I cool," Dunne said. "It's wonderful to have a best seller."

He said his personal story puts the lie to the claim by another high society writer, the late F. Scott Fitzgerald, that there are no second acts in life.

"This is the third act," Dunne said. "I have a novel coming out. I finally got it finished in the clinic ... I'm calling it 'Too Much Money.' That's a hooking title."

Dunne looked back on his life during the hour-long lunchtime phone chat.

He said he had just one regret -- his failed marriage to his wife, Lenny, who died in 1997. The couple divorced in 1965 but remained close.

"I loved that marriage," he said. "Lenny was the love of my life. And yet I ruined it. I wasn't formed yet. The regret is that I hurt her."

Dunne had his own television show, truTV's "Power, Privilege and Justice." Marc Juris, truTV's executive vice president, recalled Dunne as "a master storyteller ... who always kept his eye on the human story behind the crimes."

Besides hosting his own show, Dunne appeared frequently on CNN's "Larry King Live."

"Dominick Dunne was one of the finest people I've known," King said. "He was a terrific writer, a raconteur, and a familiar face on 'Larry King Live' for many years. He was a wonderful human being."

He was unabashedly pro-prosecution, although he said he "lost no sleep" over Robert Blake's acquittal on a charge of killing his wife, and was troubled by Martha Stewart's conviction on lying to investigators about a stock deal.

When Simpson's acquittal was announced in 1995, Dunne's jaw dropped and the courtroom cameras caught his expression. It became an iconic image. Simpson later was found liable in a wrongful death suit and ordered to pay more than $33 million to the victims' families.

Dunne had been battling cancer for several years -- a fight that became widely known when he collapsed in court last year while covering Simpson's Las Vegas armed robbery trial. He wasn't in court to see Simpson sentenced to prison.

Dunne's life story reads like one of his novels. He was born to a well-to-do family in Hartford, Connecticut, in 1925; his father was a cardiac specialist. As a young man, Dunne attended Williams College and fought in the Battle of the Bulge, winning the Bronze star.

He later found work in New York as a stage manager for "The Howdy Doody Show," a popular kids' show when television was in its infancy.

He moved to Hollywood, rubbing elbows with the biggest names in show business during the 1960s, and became a movie producer. But he soon became addicted to alcohol and drugs, hit bottom and became his own worst nightmare -- a nobody.

He sobered up and retired to a one-room cabin in Oregon to write his first novel, then headed back to New York with just a suitcase and his typewriter.

In 1985, Dunne wrote his first best-seller, "The Two Mrs. Grenvilles," loosely based on a society killing. That success was followed by "People Like Us," "An Inconvenient Woman," "A Season in Purgatory," and, following the Simpson trial, "Another City, Not my Own."

His brother, the late John Gregory Dunne, was an accomplished author and was married to Joan Didion, a wit and famous writer. In fact, Dunne has said, he was so daunted by their talent that it probably delayed the start of his own writing career by decades.

Dunne is survived by his two sons, Alexander and Griffin. Griffin is an actor-producer who has appeared in films such as "An American Werewolf in London" and "After Hours." His credits on the other side of the camera include "Fierce People" and "Practical Magic."

Asked if he believed in past lives, Dunne, ever the firm believer in second acts, said: "I believe in future ones."