DENVER, Colorado (CNN) -- Investigators in Colorado say they have broken up a massive methamphetamine ring in the Denver area that distributed pounds of the dangerous drug every week and laundered the profits using collectible comic books. 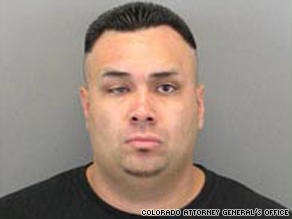 Aaron Castro and his brother were the leaders of the methamphetamine ring, authorities say.

"To launder the money you have to use something that is quick and convenient," Colorado Attorney General John Suthers said at a news conference Monday. "And in this case, they used classic comic books."

While arresting the alleged ringleaders, brothers Aaron and Alfonzo Castro, law enforcement officers seized about 100 boxes of first-edition collectible comic books. Investigators say one title alone is worth $3,500 and the total collection of comics is worth half a million dollars.

"It appeared they were working on a startup company for high-end comic books," said Don Quick, the district attorney in Adams County near Denver.

According to a grand jury indictment released Monday, the Castro brothers arranged for weekly, multiple-pound shipments of the meth from Phoenix, Arizona. The brothers then distributed the drugs to a network of runners that made deliveries to dealers around the Denver area.

Suthers says Castro brothers sometimes used females "as drug mules by having them hide methamphetamine inside their vaginal cavities." These women would then deliver the meth to a series of houses, and then lower-level dealers would distribute the drug.

"It's a tawdry piece of information, but it's a big part of what this group was doing," he said.

These same runners also collected money from dealers and delivered it to the Castro brothers. Suthers said the drugs most likely were manufactured in Mexico, and each month's shipments had a street value of about $2 million.

The indictment details 145 drug possession and distribution charges from October 2008 to earlier this month. The Castros and 39 other people are listed as defendants. The Castro brothers and their top runners are also charged with racketeering.

Of the 41 defendants, 40 are in custody. The Castros are being held in the Adams County jail on $1 million bail each. It is unclear if they have attorneys.

All About Illegal Drugs • Colorado