(CNN) -- A woman who said she had a mother-daughter relationship with slain model Jasmine Fiore told CNN's Larry King on Thursday night that Fiore never informed her that she had been married. 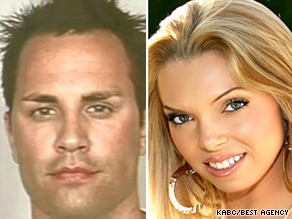 Gwendolyn Beauregard said Fiore was a close friend of her two sons, and she met the future model when Fiore was just 11. Despite the close ties -- "she called me mommy and she was my daughter" -- Beauregard was in the dark about Fiore's marriage to Ryan Jenkins. The marriage reportedly was annulled a few weeks after their Las Vegas, Nevada, wedding.

An arrest warrant for murder has been issued for Jenkins, a reality TV contestant. Authorities believe he's fled to Canada. Fiore's body was found Saturday, stuffed into a suitcase and left in a Dumpster in Buena Park, just outside Anaheim in Orange County, California.

Interviewed from San Francisco, California, Beauregard told King all she knew about Jenkins was his initial meeting with Fiore.

"She didn't tell me that she married him. She told me [about] the day that they met, which was St. Patrick's Day," Beauregard said. "She called me the day after and she said: 'Mommy, I met the most perfect guy in the world and -- and his name is Ryan.' And she just went on and on and on about Ryan and how perfect he was. And that was all I knew."

"They met in Las Vegas. Two days later [in March], they got married at the Little White Wedding Chapel. That's, of course, where Britney Spears got married," Fleeman told King.

"It was a quickie wedding. We today talked to somebody who was at the wedding. One of the witnesses was an employee of the chapel. A lot of people were shocked that both of them were married. They kept it under wraps. And the marriage had a lot of problems almost from the very beginning," Fleeman said.

Beauregard told King that Fiore, who was 28 when she died, started modeling in her early 20s.

Despite their deep bond, Beauregard said Fiore had ties with her biological mother, Lisa Lepore. "She was close to her mother, as well, but it was a different type of closeness."

Adding to the horror of the slaying was that Fiore's teeth had been extracted and her fingers removed.

"It was very clear from the very beginning, when they found her body in a piece of luggage, that we weren't dealing with a serial killer. I knew it was somebody who knew her and [that her killer] wanted to make sure that she was not identified," Brown said.

"This is why he [the suspect[ ended up cutting off her fingers ... taking out her teeth. He even got smart. He watched too many crime shows and thought he would get rid of all ID, took away her clothes, put her in the luggage, probably because it's one way to get her of an apartment. And throw it a Dumpster and hope that time will take care of it, she'll decompose, they'll never be able to identify her," Brown said.

Jenkins has appeared on VH1 shows "Megan Wants a Millionaire" and "I Love Money 3."

"This is a very arrogant man," Brown said. "Megan said it right on the show. She said he's a manipulator. He is. He has evidence of psychopathy there."

The brutality of the crime has hit Fiore's circle of friends hard.

"What he has done to Jasmine is unspeakable. It's just not right." He described her as "a beautiful person who was a very caring individual."

"There is no indication that anybody else might be involved," he said.

"We believe he's armed because there's a handgun missing from his apartment, which is the last place he was before ... he fled. So it appears that he's armed. And he's certainly dangerous because he's desperate," Rackauckas said.

All About Jasmine Fiore • Ryan Jenkins • Murder and Homicide