(CNN) -- In March, a young woman talking to a friend on the phone said she heard someone coming in the back door of her Kentucky apartment. She hasn't been heard from since. 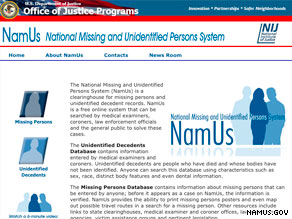 The NamUs Web site has helped in closing 147 missing persons cases and ID'ing 149 decedents since its launch.

Decades earlier, on March 15, 1967, the remains of a woman clad in a blue dress and white shoes were discovered in a field in Baltimore, Maryland.

The two cases are separated by nearly 500 miles and more than 42 years, but authorities are hoping they can both be solved with the help of a federal database that went online this year.

The National Missing and Unidentified Persons System (http://www.namus.gov//) is designed to help law enforcement agencies and medical examiners across the country unravel the mysteries of cold cases involving missing persons and unidentified remains. It also gives countless families a place to look for loved ones and a chance to find answers and peace of mind.

NamUs communications director Christine Vivian said the project "was created to address the issue of the estimated 40,000 unidentified dead nationwide, and give families a tool to assist in finding missing adults."

"As more cases are entered into the system, more people in every area -- law enforcement, victim advocacy and the general public -- can become part of the conversation that will resolve cases," Vivian told CNN in an e-mail.

The database offers what may be the most comprehensive public search engine to date for this undertaking.

"With advances in forensic sciences, there is always the possibility of closing an old case," NamUs Operations Manager Billy Young told CNN. "No matter how old the records are, we have someone looking at them."

NamUs is operated by the National Forensic Science Technology Center in Largo, Florida. It has two separate parts: a database of missing persons information containing 1,996 cases -- of which 147 have been closed -- and an unidentified decedent data system, which lists 5,569 cases. Of those, 149 people have been identified.

Information entered in the missing persons file is automatically cross-referenced with the unidentified remains cases to see if there are any matches, the Web site said.

The woman in the blue dress in Baltimore is not one of them. Her skeletal remains were found in a field in the winter of 1967, but forensic experts believe she probably died the previous year. She was 5 feet, 3 inches tall and between the ages of 21 and 45.

The young woman in Kentucky is listed on the missing persons database. She is Crystal Hall, of Pikeville. On March 1, the 24-year-old who called herself "Red" was in her apartment and told a friend on the phone that someone was trying to enter her home from the rear door. It was the last time anyone has heard from her.

Hall was last seen wearing a red shirt, dark blue jeans and large hoop earrings. She has the name "Willy" tattooed on her left leg and another tattoo of a heart on her right arm.

Her case file is typical of thousands of other entries for both NamUs databases, which contain detailed information on physical characteristics, clothing, accessories, police reports, photographs and dental charting.

Typical also is case 5593, which describes a man believed to be in his 30s who was found intoxicated and unconscious on the ground in New York on May 31. He was taken to a hospital with a traumatic brain injury and died on June 3.

The man, who had black hair and was wearing blue jeans, had several scars on his body. He was also missing part of a finger on his right hand.

Young hopes that posting the man's case on the Web site will provide answers to family or friends who may be searching for him.

"It lets them know that someone is constantly looking for their loved ones and they are not being forgotten," he said. "It gives them hope that one day they will be able to get closure."

All About Missing Persons • U.S. Department of Justice • Law Enforcement