(CNN) -- Once-missing Virginia Tech mental health records regarding a student who killed 32 people and himself in a campus rampage were released Wednesday. 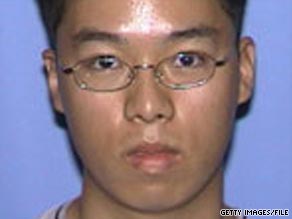 Seung-Hui Cho killed 32 students and faculty members on April 16, 2007, then killed himself.

The records cover all the interactions between Cho Seung-Hui, 23, and Virginia Tech's Cook Counseling Center during November and December 2005 -- the only times the center saw Cho, the university said, and nearly two years before his April 16, 2007, shooting spree.

They were found recently at the home of Dr. Robert Miller, the center's former director. According to the university, Miller's attorney has said the records were inadvertently taken from the center when Miller left his job there more than a year before the shootings.

The records detail a phone evaluation by the counseling center on November 30, 2005, and on December 12, 2005. Cho was evaluated in person following his release from a mental health facility on December 14, 2005.

He was sent to the facility on a temporary detention order, the records indicate, after a female student filed a complaint with university police that Cho had been instant-messaging her and left a message on her dry erase board. The records from the facility, Carilion St. Albans, note that Cho told his suitemate he might as well kill himself because "everybody just hates me."

The records said Cho stayed overnight at the facility. "Essentially, it does not appear that he had any serious intent when he made the suicidal statement," the records said. "He was counseled about the need to act responsibly."

In each of the three evaluations at the Cook Counseling Center, Cho "explicitly denied any intent to hurt himself or others and there was no evidence to the contrary," Virginia Tech said in its statement. "At the time of his last appointment, Cho was completing his fall 2005 semester exams and was scheduled to spend the holiday break with his family. He was provided with emergency contact information.

"As we know, Cho never called or returned to the Cook Counseling Center, and more than a year elapsed between the time he was evaluated by counseling center professionals and the tragic events of April 2007."

The records also contain a December 14, 2005, e-mail to the center from a university housing official, documenting Cho's "history of erratic behavior and counseling-based issues at the time of his referral to Carilion St. Albans." Cho's suitemate had notified police because he had made suicidal statements and had "blades" in his room, said the e-mail.

Virginia Gov. Tim Kaine said last month the files were discovered at Miller's home in connection with a civil lawsuit, but did not elaborate. The records' absence was a mystery and a concern during the investigation, he said. The governor said his office was asking the Cho family for permission to make the records public.

Cho's family agreed earlier Wednesday to the records' release. "The family has consistently favored and urged disclosure of their son's and brother's records in the interest of advancing the investigation into the tragic events of April 16, 2007, as well as ensuring that the families of the victims have as much information as possible," said family attorney Bernard DiMuro in a letter to Mike Melis, Virginia assistant attorney general.

"The unavailability of pertinent counseling center records during more than two years of investigation and review has created needless uncertainty and understandable speculation that has compounded the suffering of the survivors, families and the Virginia Tech community as a whole," the university said in a statement.

The records confirm facts already established by the panel that reviewed the incident, the university said. But "Virginia Tech remains deeply dismayed by the prolonged unavailability of the records and looks forward to the completion of the Virginia State Police investigation into their unauthorized removal from the Cook Counseling Center."

All About Seung-Hui Cho • Murder and Homicide • Mental Health