WASHINGTON (CNN) -- The Supreme Court has granted a condemned Georgia inmate's request that his execution be delayed as he attempts to prove his innocence. 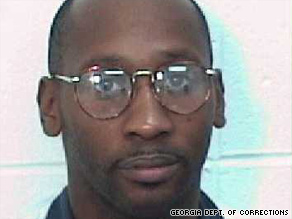 Troy Davis has always maintained his innocence in the 1989 killing of Officer Mark MacPhail.

The inmate, Troy Davis, has gained international support for his long-standing claim that he did not murder a Savannah police officer nearly two decades ago.

Justice John Paul Stevens on Monday ordered a federal judge to "receive testimony and make findings of fact as to whether evidence that could not have been obtained at trial clearly establishes petitioner's innocence."

Justices Ruth Bader Ginsburg and Stephen Breyer supported the decision. Sonia Sotomayor, who was sworn in August 8 as the newest member of the high court, did not take part in the petition.

Davis' case has had a dramatic series of ups and downs in the past year. He was granted a stay of execution by the Supreme Court two hours before he was to be put to death last fall.

A month later, the justices reversed course and allowed the execution to proceed, but a federal appeals court then issued another stay.

Stevens said the risk of putting a potentially innocent man to death "provides adequate justification" for another evidentiary hearing.

Davis has always maintained his innocence in the 1989 killing of Officer Mark MacPhail. Witnesses said Davis, then 19, and two others were harassing a homeless man in a Burger King restaurant parking lot when the off-duty officer arrived to help the man. Witnesses testified at trial that Davis then shot MacPhail twice and fled.

But since his 1991 conviction, seven of the nine witnesses against him have recanted their testimony. No physical evidence was presented linking Davis to the killing of the policeman.

The Georgia Pardons and Parole Board last year held closed-door hearings and reinterviewed the witnesses and Davis himself. The panel decided against clemency.

"It doesn't make any sense," she said. "We are praying for a miracle or some kind of intervention. We will regroup and fight. We will never stop fighting. We just can't be discouraged. The fight is not over till it's over."

"Petitioner's claim is a sure loser," wrote Scalia. "Transferring his petition to the [federal] District Court is a confusing exercise that can serve no purpose except to delay the state's execution of its lawful criminal judgment."

Ten days after the high court refused last October to intervene, a federal appeals court in Georgia granted a temporary stay of execution. Since then, further appeals by Davis' legal team have dragged on for nearly a year.