Arrest made in attack on Milwaukee mayor

(CNN) -- A 20-year-old Wisconsin man accused of attacking the mayor of Milwaukee with a metal pipe has been arrested, police said Sunday. 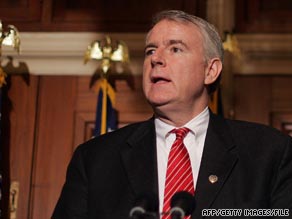 Mayor Tom Barrett was in stable condition Sunday at a Milwaukee-area hospital after he was attacked the night before at the Wisconsin State Fair in nearby West Allis, police said.

Barrett was leaving the event with his family when he heard a woman crying for help, police said.

When Barrett began calling 911, the man who had been attacking the woman charged at him and began battering him with a metal pipe, police said.

Police arrested Anthony Peters in connection with the attack.

Watch the mayor's brother talk about what happened »

West Allis Police Chief Michael Jungbluth said the attack on the woman stemmed from a domestic situation, when an intoxicated Peters wanted to see his 1-year-old daughter, and had threatened to shoot himself and others.

All About Milwaukee • Crime