(CNN) -- An Arizona man caught leaving water bottles in the desert for illegal immigrants has been sentenced to 300 hours of community service and a year of probation, an aid group said. 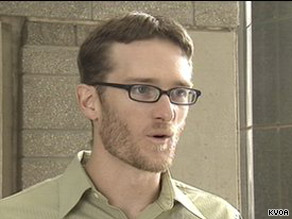 Walt Staton was convicted in June of littering by leaving jugs of water in a wildlife refuge.

Walt Staton, a member of the group No More Deaths, left full water bottles in December in Buenos Aires National Wildlife Refuge for the illegal immigrants who routinely pass through the 18,000-acre refuge, according to court documents.

A judge sentenced him Tuesday to 300 hours of picking up trash on public property and a year of probation, No More Deaths said in a written statement. He is also banned from the refuge during that time, the group said.

Although the case involved only a misdemeanor charge, both sides used the divisive issue of illegal immigration in their arguments; Staton's lawyer argued that Staton's actions were humanitarian, but the government said otherwise.

In a sentencing memo, the federal prosecutors wrote that Staton's "actions are not about humanitarian efforts, but about protesting the immigration policies of the United States, and aiding those that enter illegally into the United States."

Noting the phrase scrawled on many of the plastic water jugs -- "buena suerte," or "good luck" in Spanish -- the prosecutors said, "The obvious conclusion is that the defendant and No More Deaths wish to aid illegal aliens in their entry attempt."

They also said, as did the U.S. Fish and Wildlife Service, that leaving the full plastic jugs on the refuge is detrimental to the health of the animals that live there.

Citing a biologist, the prosecutors said that animals could eat the plastic and that others could get feet or antlers caught on the bottles.

Prosecutors had requested a $5,000 fine, along with five years of probation, according to court documents.

Staton, who No More Deaths says is to begin seminary school at the Claremont School of Theology in Claremont, California, had initially refused to pay a $175 fine for littering, said Staton's lawyer, Bill Walker.

After his refusal, the government enhanced the charges against him, arguing that he "knowingly littered," said Walker, who is also a member of No More Deaths.

The charge can carry a $100,000 fine and a year in jail, Walker said. Charges against three other people who were cited with Staton in December were dropped, he said.

A jury convicted Staton in June of littering. Walker said he is appealing.

"We think that Walt did nothing wrong," he said. "We do not think that this conviction will be upheld on appeal."

He described Staton as "the kind of guy you'd want to have as your next door neighbor."

A spokeswoman for the U.S. Attorney's office in Arizona declined comment.

Mike Hawkes of the Buenos Aires National Wildlife Refuge said Thursday that although he had no issue with groups leaving water out for illegal immigrants, "there's ways to do it without leaving plastic jugs out there."

He said the plastic jugs were strewn throughout the refuge, which is home to hundreds of bird, reptile and mammal species, according to its Web site.

Hawkes said refuge officials and members of No More Deaths had met and were trying to come up with methods that don't involve plastic bottles.

Staton is the second member of No More Deaths to be convicted of littering, according to court documents; however, the other received a suspended sentence.

Walker said that after Staton's conviction, 13 No More Deaths members were charged with littering on the refuge.

With tens of thousands of illegal immigrants crossing through the refuge -- Hawkes said last year's number was about 54,000, down from hundreds of thousands years earlier -- the last water-related death there was in June 2008, he said.

All About Arizona • Immigration