LOS ANGELES, California (CNN) -- A California judge on Wednesday postponed the sentencing of singer Chris Brown for the assault of Rihanna, the singer with whom Brown has had a romantic relationship. 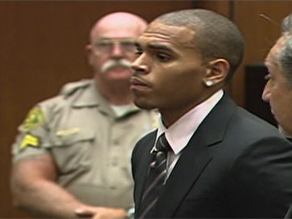 Chris Brown appears at the hearing Wednesday. The actual sentencing has been rescheduled for August 27.

Los Angeles Superior Court Judge Patricia Schnegg was expected to impose five years of probation and about 1,400 hours in "labor-oriented service." However, Schnegg said documents detailing his proposed community service plan in Virginia, where Brown maintains a legal residence and wants to serve his sentence, had not arrived in time for her to approve them for sentencing.

Schnegg has said Brown could apply to have his supervised probation transferred to Virginia and complete his community service there, but it would have to meet the court's standards.

Rihanna did not attend Wednesday hearing. Brown, wearing a dark business suit, entered the court with his attorney, Mark Geragos.

"My client is doing great, she is hard at work," Rihanna's attorney, Donald Etra, said after the brief hearing.

"We were obviously hoping all proceedings would be concluded today," he added.

Watch events at the hearing »

The sentencing was rescheduled for August 27.

Rihanna -- whose real name is Robyn Rihanna Fenty -- appeared briefly in court in June after Brown admitted he was guilty of a felony assault in a plea deal.

His probation requires that Brown complete domestic violence counseling. The judge said he cannot have contact with Rihanna again until that is completed.

Etra refused to say whether Rihanna wants a current "stay away" order lifted, but said it would be discussed at the August 27 hearing. He said the order has not been violated.

Brown, 20, was arrested after an early morning argument inside a rented Lamborghini on a Hollywood street in February.

The incident began when Rihanna, who was riding in the sports car driven by Brown, found a text message on his cell phone from "a woman who Brown had a previous sexual relationship with," according to a sworn statement by Los Angeles Police Detective DeShon Andrews.

"A verbal argument ensued," followed by the physical attack, the statement said. It went on to describe the assault in great detail, saying Brown punched Rihanna -- identified in the statement as Robyn F. -- numerous times and put her in a head lock, restricting her breathing and causing her to start to lose consciousness. He threatened to beat her and kill her, according to the statement, and he bit her ear and her fingers.

Brown made a public apology last month in a video statement posted on his personal Web site.

Brown, in the two-minute video, said he had wanted to "publicly express my deepest regret and accept full responsibility" since February, but he had remained silent on the advice of his defense lawyer.

"Although I will do some interviews and answer some questions in the future, I felt it was time you heard directly from me that I am sorry," he said in the video.

Brown, who lost several product endorsements after his arrest, said he realizes he has "truly been blessed" and he intends "to live my live so that I am truly worthy of the term role model."