RALEIGH, North Carolina (CNN) -- Men arrested last week on suspicion of plotting a "violent jihad" overseas had weapons, thousands of rounds of ammunition and $13,000 cash in their home, an FBI agent testified in court Tuesday. 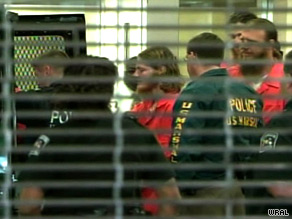 An FBI agent testified he considers Daniel Patrick Boyd and six others "a risk of flight" who should be denied bail.

Also found at the home of Daniel Patrick Boyd and his sons were gas masks and a book that FBI special agent Michael Sutton called "essentially our playbook to how we respond to acts of terrorism."

The seven men arrested last week should not be released on bail, he said.

"I think all of them are a risk of flight, your honor," Sutton testified, noting allegations that all the defendants had traveled overseas.

All face charges of supporting terrorism and conspiracy to commit murder abroad. Authorities are seeking an eighth suspect in the case.

Officials identified three of the men as U.S. native Daniel Patrick Boyd, 39 -- who had fought against the Soviets in Afghanistan -- and Boyd's sons, Dylan Boyd, 22, also known as "Mohammed," and Zakariya Boyd, 20.

The four others are: Mohammad Omar Aly Hassan, also a U.S.-born citizen; Hysen Sherifi, identified as a native of Kosovo who is a legal permanent resident of the United States; and Ziyad Yaghi and Anes Subasic, both naturalized U.S. citizens.

"I know that my husband and my sons are free of guilt," she told CNN on July 28, when they were arrested. "I'm hopeful that the truth will come to light."

The arresting agent told Sutton that Daniel Boyd attempted "to acquire his sidearm," and that Dylan Boyd "failed to comply with their instruction and had to be subdued." In a later interview, the younger Boyd told Sutton he had not gone for his gun.

Five surreptitiously recorded audio tapes were played in the hearing, along with a cell phone video showing someone firing an AK-47.

• 27,000 rounds of ammunition, including some armor-piercing types;

• A book called "Emergency Response to Terrorism," which Sutton said would be useful to someone trying to counter law enforcement;

• An old identification card. Sutton said an FBI linguist says it reads "monotheism, jihad and power. ... No God but God. Mohammed is his messenger." On the flip side it says that the carrier is allowed into a certain house alone but should surrender the card when leaving.

All About Federal Bureau of Investigation • Kosovo • North Carolina