Arrest made in death of Nazi concentration camp survivor

NEW YORK (CNN) -- A Bronx woman has been charged with murder and robbery in the death of an 89-year-old Nazi concentration camp survivor, and police said a man is still being sought in connection with the death. 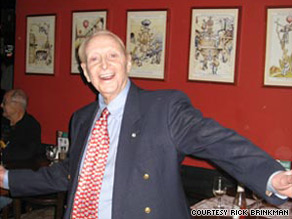 Felix Brinkmann dances at a 2008 birthday party. "He was not the kind of guy who had enemies," his son says.

Angela Murray, 30, was arrested Saturday, according to the Manhattan district attorney's office, and is accused of strangling Guido Felix Brinkmann on Thursday in his Upper East Side apartment.

Murray was arraigned Sunday and charged with one count of murder in the second degree and three counts of robbery.

Brinkmann, a native of Latvia, was a Holocaust survivor who escaped death for a year while he was in the Mauthausen, Ebensee and Auschwitz camps. He had been slated for the gas chambers five times, but each time, he used his fluency in German to talk his way out, said his son, Rick Brinkman, who spells his last name differently.

After the war, he was stunned to discover his wife, who had also been shipped to Auschwitz, alive and well in Poland.

The Brinkmanns immigrated to America, where Brinkmann spent years in the bar and nightclub business, co-founding the Adam's Apple disco in Manhattan in 1971.

In recent years, he had been the real estate manager of a mixed-use building in the Bronx, working "seven days a week, without fail," Rick Brinkman said.

On Thursday, the building's superintendent grew concerned when Brinkmann did not show up for work. He notified Brinkmann's son and received permission to enter the father's apartment, where he had lived alone since his wife died last year.

Brinkmann was found face-down in his bedroom, his hands bound behind his back and his body showing blunt-force trauma wounds, police said. Brinkmann's blue 2009 Honda Civic had been stolen, along with one of two safes in his apartment, police said. The vehicle was later recovered in the Bronx.

Rick Brinkman speculated that the killing was random. "Anybody who knew him really liked him," the son said. "He was not the kind of guy who had enemies."

All About New York City • Murder and Homicide