Commentary: Why not prohibit smoking?

By Tony Newman
Special to CNN

Editor's note: Tony Newman is the director of media relations at the Drug Policy Alliance Network. 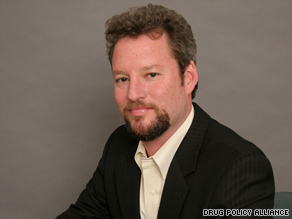 NEW YORK (CNN) -- Cigarettes kill; 400,000 people die prematurely every year from smoking. When we analyze the harm from drugs, there is no doubt that cigarettes are the worst.

They kill more people than cocaine, heroin, methamphetamine and all other illegal drugs combined.

More than 800,000 people are arrested every year for marijuana, the vast majority for possession, yet all the data from studies that compare the two substances show that cigarettes are more harmful to an individual's health. If we make these other drugs illegal, shouldn't we outlaw the leading killer?

Considering how we deal with less harmful drugs, making cigarettes illegal seems logical. Over the past decade, we have seen, in states from California to New York, increasing restrictions on when and where people can smoke -- and even momentum toward tobacco prohibition.

Smoking is banned in bars and restaurants and on some university campuses. People can now be fired from their jobs because they can't give up smoking. We have seen parents denied adoption rights if they smoke. In some cities, it is nearly impossible to smoke anywhere besides your own home.

The Drug Policy Alliance sponsored a Zogby Poll in 2006, and we were shocked to find that 45 percent of those polled supported making cigarettes illegal within the next 10 years. Among 18- to 29-year-olds, it's more than 50 percent.

But with all of the good intentions in the world, outlawing cigarettes would be just as disastrous as the prohibition on other drugs. After all, people would still smoke, just as they still use other drugs that are prohibited, from marijuana to cocaine. But now, in addition to the harm of smoking, we would find a whole range of "collateral consequences" that come along with prohibition.

A huge number of people who smoke would continue to do so, but now they would be considered criminals. We would have parents promising their kids that they will stop smoking but still sneaking a smoke.

We would have smokers hiding their habit and smoking in alleys and dark corners, afraid of being caught using the illegal substance. We would have cops using precious time and resources to hassle and arrest cigarette smokers. Our prison overcrowding crisis would rise to an unprecedented level with "addicts" and casual cigarette smokers alike getting locked up.

We would have a black market, with outlaws taking the place of delis and supermarkets and stepping in to meet the demand and provide the desired drug.

Instead of buying your cigarettes in a legally sanctioned place, you would have to hit the streets to pick up your fix. The cigarette trade would provide big revenue to "drug dealers," just as illegal drugs do today. There would be shootouts in the streets and killings over the right to sell the prohibited tobacco plant.

We have tried prohibiting cigarettes in some state prisons, like in California, and we have seen that smoking continues, with cigarettes traded illicitly. There is a violent black market that fills the void and leads to unnecessary deaths over access and the inflated profits.

Luckily, no one is proposing making cigarettes illegal. On the contrary, our public health campaign around cigarettes has been a model of success compared with our results with other prohibited drugs. By placing high taxes on cigarettes, restricting locations where one can smoke and banning certain kinds of advertising, we have seen a significant decline in the number of people who smoke.

Instead of giving teens "reefer madness"-style propaganda, we have treated young people with respect and given them honest education about the harm of cigarettes, and we have been rewarded with fewer young people smoking today than ever before.

Although we should celebrate our success and continue to encourage people to cut back or give up smoking, let's not get carried away and think that prohibition would eliminate smoking.

We need to realize that drugs, from cigarettes to marijuana to alcohol, will always be consumed, whether they are legal or illegal. Although drugs have health consequences and dangers, making them illegal -- and keeping them illegal -- will only bring additional death and suffering.

Don't just take my word for it. Take it from the news anchor who was called the most trusted man in America, Walter Cronkite.

Here is what he said about prohibition and our war on drugs: "I covered the Vietnam War. I remember the lies that were told, the lives that were lost -- and the shock when, 20 years after the war ended, former Defense Secretary Robert S. McNamara admitted he knew it was a mistake all along. ...

"And I cannot help but wonder how many more lives, and how much more money, will be wasted before another Robert McNamara admits what is plain for all to see: The war on drugs is a failure."

The opinions expressed in this commentary are solely those of Tony Newman.

All About Smoking • Illegal Drugs • Crime