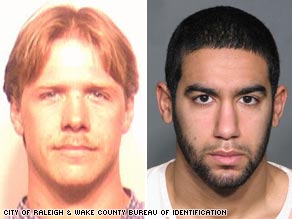 Robin Zier of the U.S. attorney's office in Raleigh told CNN that the eighth person, whose name has been redacted from court documents, is a U.S. citizen.

She added that U.S. Attorney George Holding had said federal authorities hoped to have the person apprehended soon, and the public should not be worried.

The U.S. attorney's office would not release further details.

According to an indictment released Monday, the eighth suspect, described as a North Carolina resident, traveled to Pakistan in October 2008 to "engage in violent jihad." It offered no other information.

Seven other men have been arrested on charges of supporting terrorism and conspiracy to commit murder abroad.

Officials identified three of the men as U.S. native Daniel Patrick Boyd, 39, and Boyd's sons, Dylan Boyd, 22, also known as "Mohammed," and Zakariya Boyd, 20. Daniel Boyd had fought against the Soviets in Afghanistan.

The four others are: Mohammad Omar Aly Hassan, also a U.S.-born citizen; Hysen Sherifi, identified as a native of Kosovo who is a legal permanent resident of the United States; and Hiyad Yaghi and Anes Subasic, both naturalized U.S. citizens.

Watch why wife says they were in Mideast »

Officials did not immediately identify the native countries of Yaghi and Subasic.

All seven are accused of engaging in weapons training and military tactics in North Carolina, the Justice Department said.

Sabrina Boyd, the wife of Daniel Patrick Boyd and the mother of the two younger Boyds, said the charges had not been substantiated.

"We are decent people who care about other human beings," Sabrina Boyd said in a statement read on her behalf by Khalilah Sabra.

"I have raised my sons to be good people and we are a good family," she said, according to Sabra, the North Carolina director of the Muslim American Society's Freedom Foundation, a civic and human rights group.

Sabrina Boyd said in the statement that her husband had fought against the Soviets in Afghanistan with the "full backing" of the U.S. government.

Boyd went on to say in an interview with CNN that her family had traveled to the Middle East for peaceful reasons, including praying for a son who had died in a car crash.

"We all had agreed to go the Holy Land and pray for our son," Boyd said. "It would be a positive action and it would help console us and it would be in a place where we felt, Islamically, we could do the most good for our departed beloved."

It said Yaghi and Hassan had also traveled to Israel in June 2007, and that Daniel Boyd had lied to Customs and Border Protection agents at the Atlanta, Georgia, and Raleigh airports about intending to meet the two men in the Jewish state.

The indictment also said Daniel Boyd had traveled to Gaza in March 2006 "to introduce his son to individuals who also believed that violent jihad was a personal obligation on the part of every good Muslim."

All the trips were taken to "engage in violent jihad," the indictment alleges, without providing details.

The documents make no reference to a direct threat to individuals or property in the United States, but said the men had practiced military tactics in a North Carolina county that borders Virginia.

The defendants, with a substantial cache of weapons, had "practiced military tactics and use of weapons on private property in Caswell County, North Carolina, in June and July 2009," the indictment said.

Daniel Boyd, "a veteran of terrorist training camps" had "conspired with others to recruit and help young men travel overseas in order to kill," according to a written statement from the Justice Department's top counterterrorism official, David Kris.

It was unclear whether the seven had hired lawyers, and the federal public defender's office in Raleigh did not immediately return a phone call.