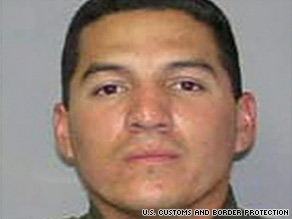 Mexican federal police identified the men as human smugglers, and said they were in the act of transporting 21 immigrants when they were detained in the northwest state of Baja California, Notimex said.

Border Patrol Agent Robert Rosas was shot and killed Thursday night while responding to a potential incursion into the United States in the Campo area in San Diego County, U.S. authorities said.

The Mexican federal police did not offer specific evidence of the suspects' role in the killing, but said intelligence reports indicated the group was responsible for kidnappings, rapes and murders of several people who tried to cross to the United States, Notimex said. The men were wanted by American authorities, police said.

Notimex said that during his interrogation, Jose Eugenio Quintero told investigators the shooter was Ernesto Parra Valenzuela, a man arrested the day before by local police in Tecate, Mexico.

Rosas, who is survived by his wife and two young children, had been a border agent for three years.

Rosas was the ninth Border Patrol agent to be killed while on duty since 2006, according to the agency's Web site.

Two agents died in a vehicle wreck in 2006, and four died in 2007, including two who died in vehicle wrecks, a third who drowned and a fourth who suffered a heart attack while pursuing undocumented immigrants.

Two agents died on duty last year, the Border Patrol said. One died in a single-vehicle wreck; another was struck and killed by a vehicle driven by a suspected smuggler, according to the agency's Web site.