(CNN) -- With four Phoenix, Arizona, boys ages 9 to 14 charged with sexual assault on an 8-year-old girl, a prosecutor vowed Thursday his office will "seek justice for the young victim in this heartrending situation." 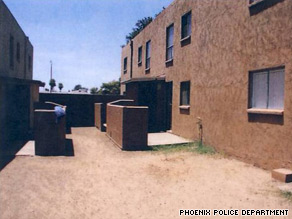 Police say a girl was lured to a storage shed at an apartment complex where she was sexually assaulted.

"This is a deeply disturbing case that has gripped our community," said Maricopa County attorney Andrew Thomas.

According to Phoenix police, the girl was lured to a storage shed at an apartment complex on July 16. The four boys, who had offered the girl chewing gum, allegedly restrained and sexually assaulted her. At a news conference about the case Wednesday, police did not release any information on the girl's condition, but officers called the case one of the worst they have investigated in many years.

All the suspects except for the 14-year-old live in the same apartment complex, according to Phoenix police Sgt. Andy Hill.

The victim and the boys charged are all from refugee families that have come to the United States from the war-torn West African nation of Liberia, police said.

Detectives said the girl was placed in the custody of Phoenix child protective services after the attack because of her parents' attitude toward her.

"The parents felt that they had been shamed or embarrassed by their child," Phoenix police Sgt. Andy Hill said.

The Phoenix Police Department has a community response unit that assists with such sensitive cases. "They made some initial contacts with the refugee community. They acted as liaison and were present when the child protective services agency took the victim," Hill said.

Protective services officers "will determine what's going to happen in the days ahead and they'll look at the past history with that family, if there is one," he said.

CNN affiliate KTVK said it interviewed the girl's 23-year-old sister, who said she was baby-sitting the girl at the time of the alleged attack.

The sister, who was not identified by name by the station, expressed mixed feelings about her sister's attack. "I came to her and said it's not good for you to be following guys because you are still little," the sister told KTVK. She also said that she wanted the suspects to be released from jail because "we are the same people."

"When she comes back I'm going to tell her don't ever do that again because all of us, we are the same family, we are from the same place. Now she is just bringing confusion among us. Now the other people, they don't want to see her," the sister told KTVK.

Tony Weedor, a Liberian who fled civil war with his family and now lives in the Denver, Colorado, area, told CNN that cultural aspects are deep in the case. In Liberia rape was not against the law until 2006, he said.

"The family [believes they] have been shamed by her, not a crime, but the name of the family has been degraded and news will get back to Liberia. And they're more concerned about that than the crime," said Weedor, who is co-founder of the CenterPoint International Foundation, which aids Liberian refugees in the United States and provides aid for those still in Liberia.

Edwin Sele, the deputy ambassador of Liberia to the United States, also responded to the incident.

"Having heard the story myself, I'm outraged," he said. "In Liberia, the family and law enforcement officers would be embracing the victim. To hear that the family is not doing that, that should be an isolated case."

Resettlement groups around the country help refugees settle into life in the United States. Among them is the Refugee and Immigrants Relief Center in Phoenix, where Omar Dolleh, a refugee from Sierra Leone in West Africa, is the program director.

As a part of the refugee orientation program, he said, his group touches upon the laws in the United States, but the most immediate goal for refugees and organizations that help them is finding employment and places to live.

All About Phoenix (Arizona) • Liberia • Crime